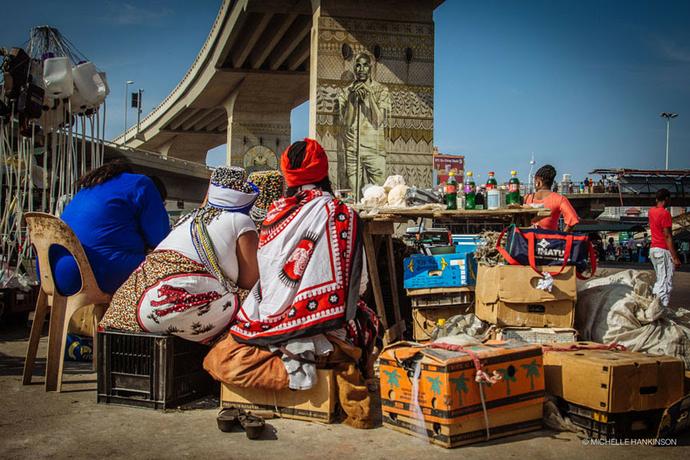 TAKE your idea of an average public transport hub in a South African CBD; add about 400 000 daily commuters and 8 000 informal traders, and you will have a mental image of what a day at the intersection of David Webster and Julius Nyerere Street in Durban is like.

This hub is called Warwick Junction (also Warwick Triangle) and it is here that Cape Town-based artist, Faith 47, has recently completed six murals which feature people who are traders at the market as her models. 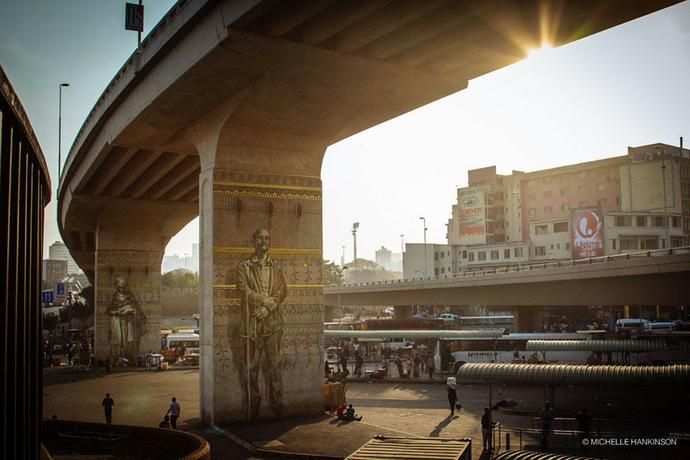 She was invited to paint murals in Durban as part of the 25th World Congress on Architecture and, after scouting different parts of the city, she settled on Warwick Junction.

“Of all the places we looked at in Durban there is nothing quite like the market. I think quite a few people in Durban avoid that area, seeing it as a ‘danger’ zone, and I admit there are definitely some criminal elements at work there, but there is also a wealth of culture and vibrancy that is part of the real fabric of our country.” - Faith 47

It was this sense of vibrancy and culture that she wanted to celebrate by choosing to ask the traders at the market to be in the murals.

“When I first visited the Warwick triangle, I was quite overwhelmed and I fell in love with it immediately. It’s a very intense area; the different markets are all sitting right on top of each other but there is a chaotic order to it, overall. It is the people themselves who create the identity of this space and it’s grown quite organically over time. I’m interested in informal trading because it is a great strength to the economy, but it seems that the government prefers to support big business judging from the trading by-laws that are increasingly becoming tighter. There are plans for a mall to be built in this location which will threaten the livelihood of traders in the area and I wanted to paint something that they would feel belongs to them, something that represents them and acknowledges their presence there.” 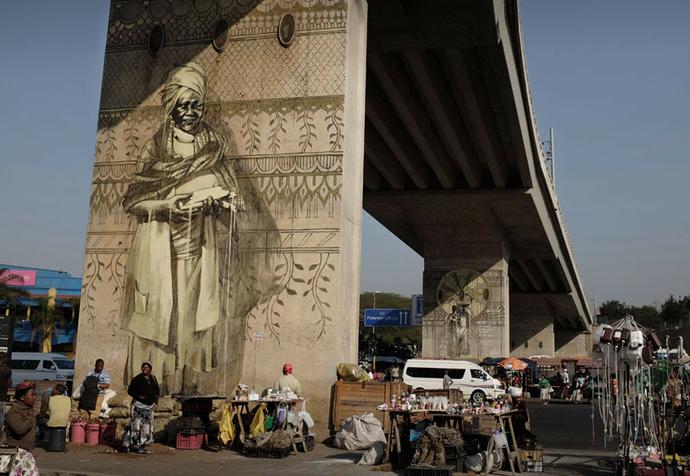 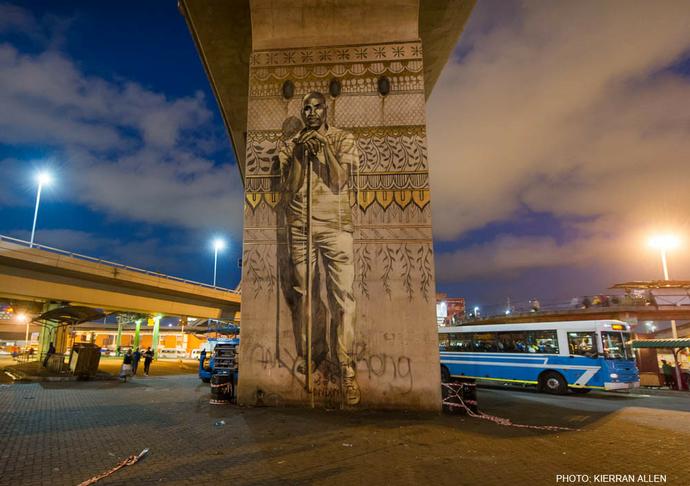 The eThekwini municipality announced plans in 2009 to build a mall at the intersection but the traders were opposed to these plans and the matter eventually resulted in clashes between the traders and metro police. Now, five years later, there is no mall at the site as yet.

Picking only six subjects in a place that is made up of about 8 000 traders, most of whom are women, was not an easy task for Faith. There are different markets at the junction; some sell beadwork, arts and craft, food, meat and some traditional healers also consult from there. Her request for people to be in her murals had to go through the committees of the specific markets in which the people worked in.

“The people at the nyama (meat) market would hardly even let us explain the project to them as they just assumed we were there to exploit them. So we were aggressively chased away, which was quite a disappointing experience. The other markets, however, were much more inviting and we sat for ages with Ma-Dlamini hearing about the experiences that the traders face.”

Faith says it was important to have the traders’ participation and it worked out smoothly in the end.

“I’m happy with the final images. For instance, Xolani is actually an inyanga (traditional healer), but in the portrait he looks like an ordinary man where one cannot necessarily see his profession through any traditional clothes (in the mural). I’m happy about that because the murals are true to life, represent the everyday person. We pass people on the street and their background, their many life stories and experiences are hidden within them.” 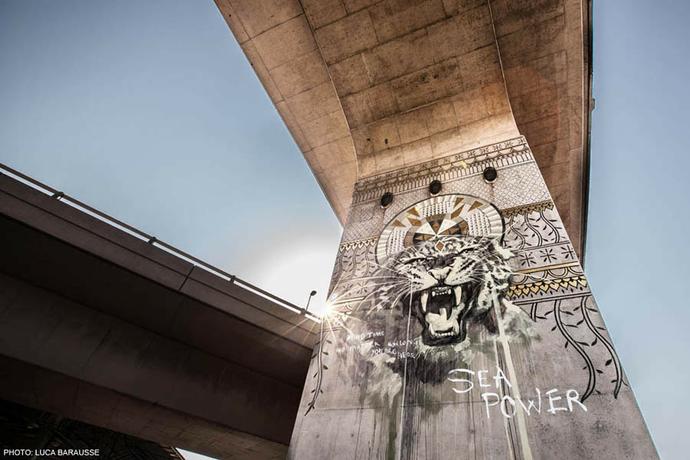 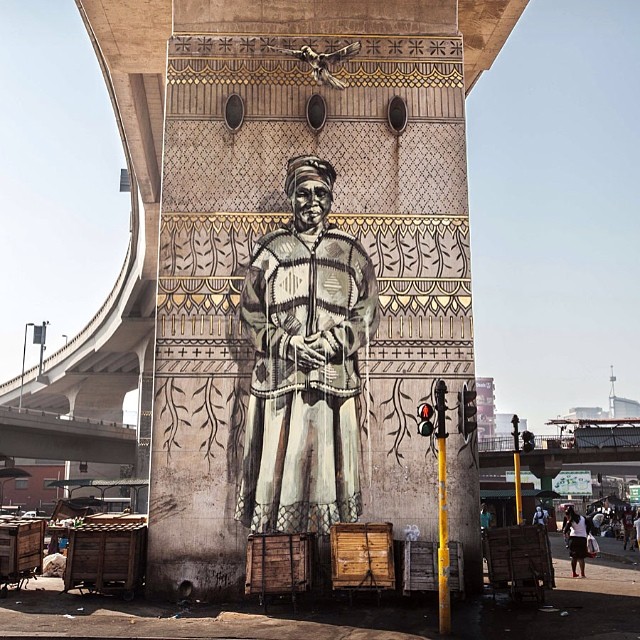 Street art and architecture do not always sit comfortably with each other because what one sees as street art looks like a wall being defaced to someone else. But, Faith says her work and architecture are tied together in a very specific way.

“The work I do interacts with architecture in a very specific manner, I am always studying walls, looking for buildings with character or power. I am sensitive to the style, textures and feeling of the buildings around me.”

“Architecture can alienate or embrace a community. Architects are often insensitive to this or planning is done in a way that is impersonal or irrelevant to the needs of the community. An architect holds a special kind of power. But essentially it is the people who then create a space, break down walls, reinvent areas for ways that serve their lifestyle. This is a very interesting sphere of study.” 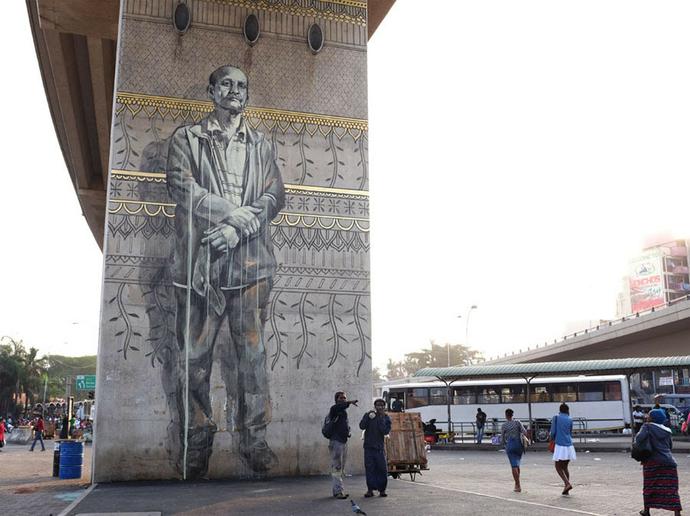 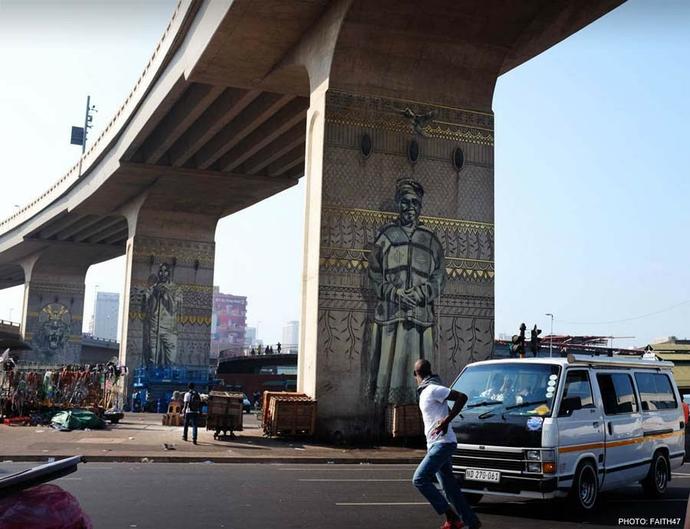 Faith sends special thanks to Ma-Dlamini, Mr Singh, Mambutho and Xolani Nwza, of which four of the pillars feature their portraits. The other two feature animals; a tiger and a cow. 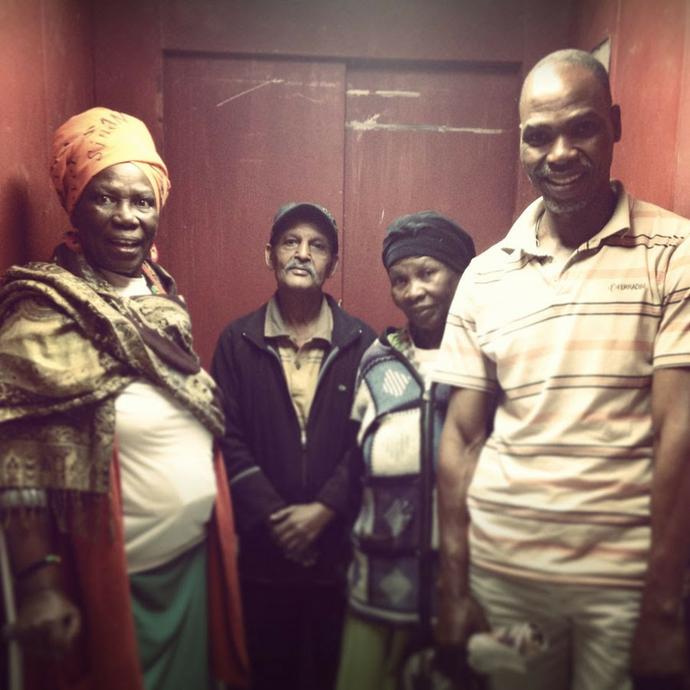 Watch the official video of Faith 47 in Durban for a greater sense of the work its surroundings: