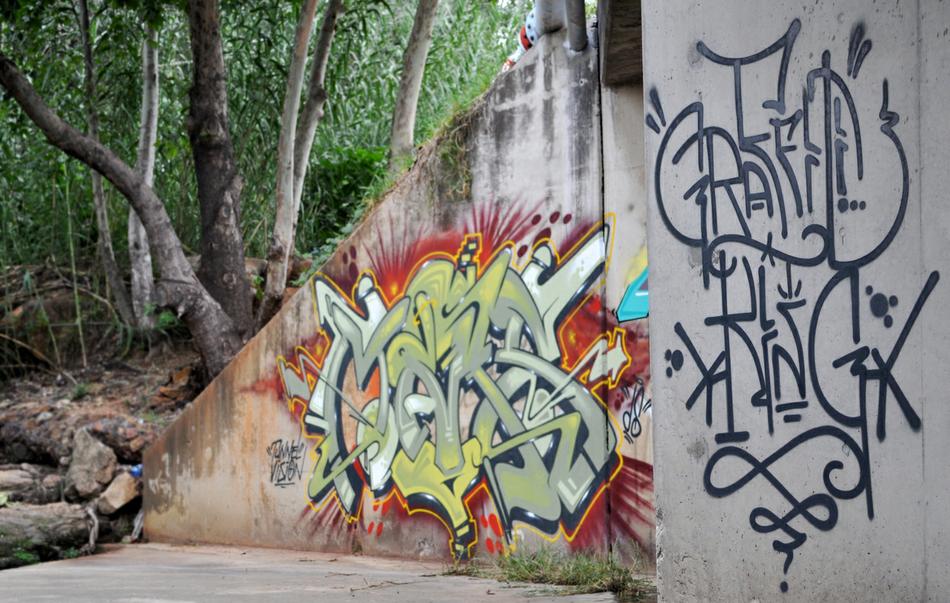 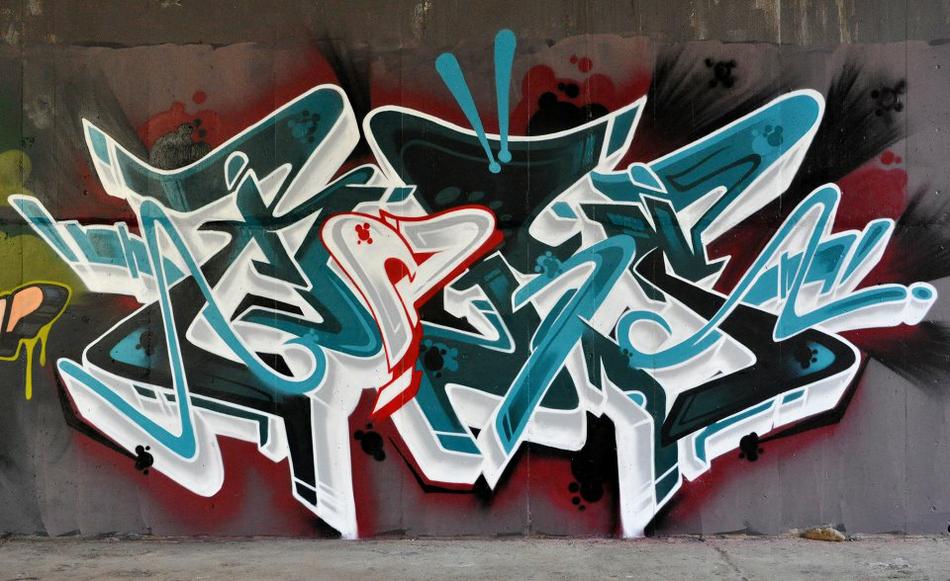 How did you get into graffiti… Was there anything that sparked this obsession?

I was 13-14 years old and first saw graffiti in a Source magazine. Later that year, a friend and I were watching a movie called “187” and these kids from L.A were drinking, smoking weed, skateboarding and doing graffiti. Graffiti was the subsequent misdemeanour – we were already doing all the other stuff. We drew some shit graffiti attempts and the next day made a mess in an abandoned church next door. Looking back, it had nothing to do with art, we were just fucked up.

How did you come across your name?

Maybe a year later, after dabbling with random names, words, characters, mostly on paper, still not knowing what graffiti is or meant to be, we were at the same church and I had an alien character I did. I wanted to put a word next to it, so being a dumbass I did the most obvious thing and free-styled a horrific MARS. I ran out of paint halfway through, this happened often in the toy days… At the time I was unaware that there are a million other Mars’ in every city around the world. I would have chosen something more original had I known. 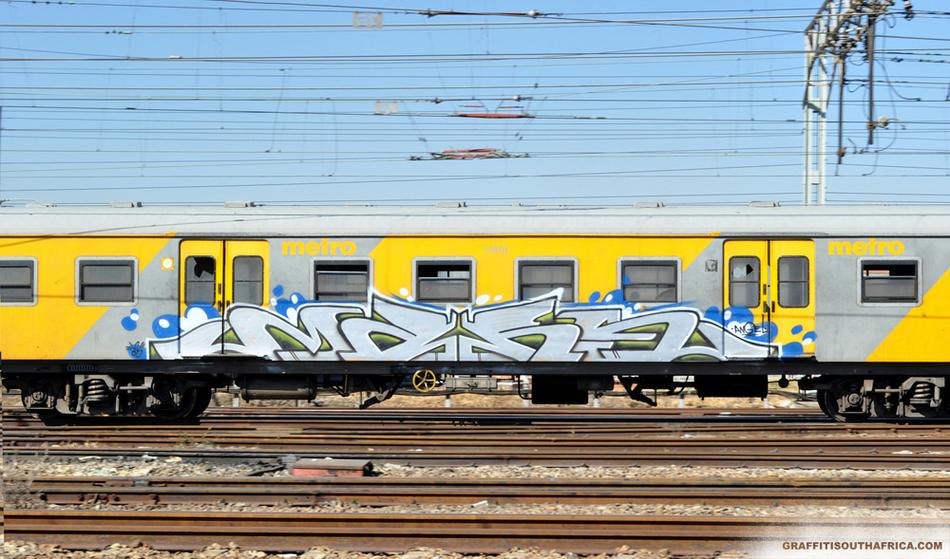 What was the scene like when you first started writing?

There was no scene really, the only graffiti I saw was DS and DBS tags around my area, being young I also couldn’t get around much so that’s all I knew. There were no graffiti shops, no imported name brand spraypaint, no books, no blogs, no Facebook, no super-star graffiti artists, NOTHING… I discovered Artcrimes.com, and in the following years looked at every single page on that site, maybe even twice, no jokes.

Around 2005, I went to Cape Town for the first time and brought back two rare gems; the “Graffiti World” book and 2 Montana cans from the graffiti store in Canal Walk, I think. Less than 8 years later and I have over 30 books and 6 different international brands of spray-paint on my shelf. It’s been a crazy transition from fuck all to information overload.

Your style keeps evolving and you go through ‘style phases’. Give us a little insight… This new style of yours is very funky and ‘loose’ – and not symmetrical at all. Tell us more about your decision to move towards it…

For a long time I did symmetry pieces, and in recent years have been trying to make them more interesting than typical boring graffiti, you know, have the “WOW” effect. I came to a point where I realised that the symmetry had reached its highest point for me and it wasn’t going to get any more interesting or “WOW”. I still use a lot of the same shapes and elements, along with new ones. I always try doing something new, I like being meticulous and at the same time spontaneous; making a medley out of two extremes, often one prevails. At times you can see a piece is a lot more spontaneous and experimental. Bombing is obviously a little different, repetition is key. I try being versatile; characters, pieces, backgrounds, anything with a can that I want to do. 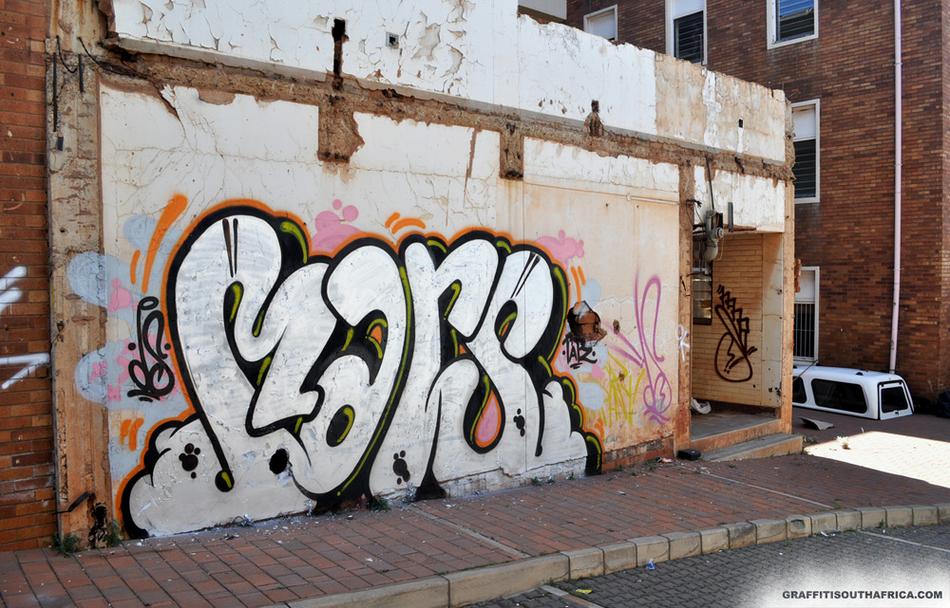 You like to add extra flare to your pieces by adding characters. Have you ever felt a need to explore characters more?

Definitely, like I said, I want to do it all – be well rounded artistically, that includes characters. Hell, I might even do some more street art orientated stuff in the future, who knows, I just ride the wave. 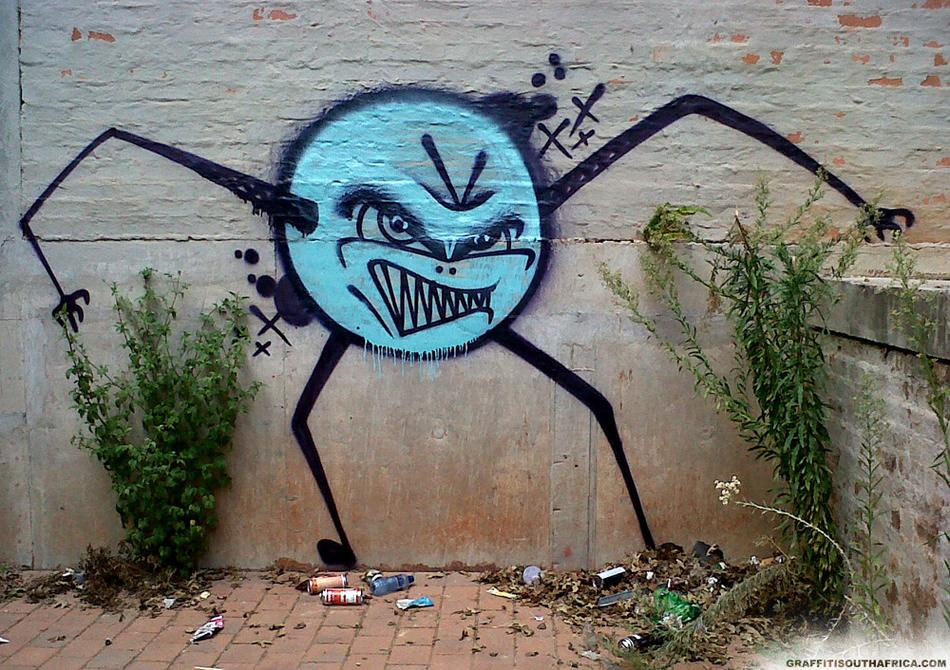 Tell us about your crew, Demolition Squad…

Your crew has been putting up high class productions lately. Do you plan a wall or do you just freestyle? And is it hard to translate your ideas from paper onto the wall?

Tapz, Tyke, Aybe (London), Fiya and Mars. Whereas a lot of crews are a bunch of weak writers coming together to make an average crew, DS is five individually strong writers who form a well rounded, prolific crew. We all have strengths and are all versatile; we bomb, do pieces, trains, jobs and live graffiti. DS has been around for over 10 years and has outlasted many crews throughout the years. Writers come and go within the crew, but those that are meant to be here are. I think we are the strongest now than we ever have been.

Walls get planned differently. Sometimes we meet for serious concepts, and other times we just do whatever on the day.

Favourite surface to paint on?

Lately; weird textured walls, over windows and protruding surfaces. I like how it looks - not so perfect like on a flat wall. Trains are also nice, if you don’t know why, then I suggest you go do one. 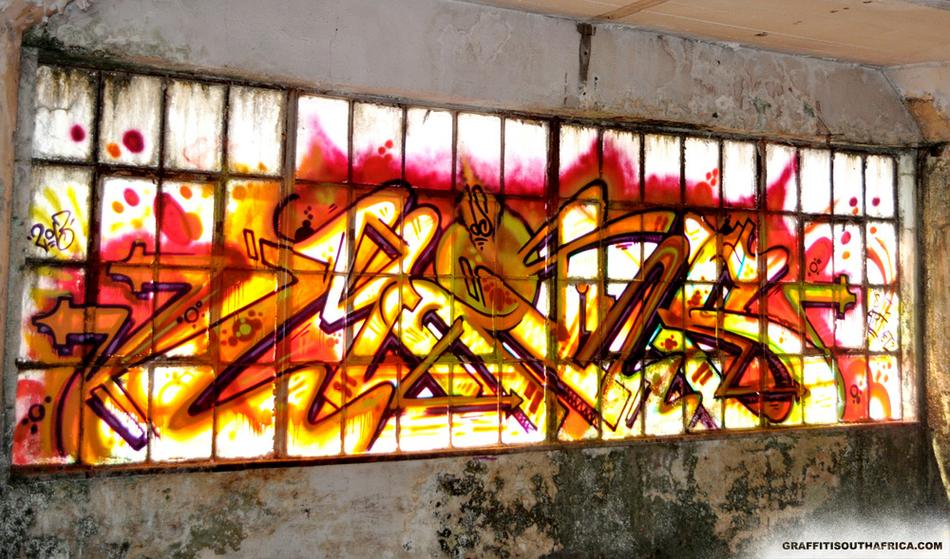 You’ve smashed a lot of trains in recent years… I’m sure you might have some crazy stories?

Being shot at definitely changes ones perception of life and how fragile it is. Myself, Angel, Trips and a German tourist writer, Azme, got to experience this one night not so long ago. Trips and I ran one way and were about 2 meters apart, we heard the bullet fly through in between us. I always cherished my time on this earth as I experienced death at an early age, but this definitely gave me insight to my own mortality and how much I love being here.

Which artists do you admire the most right now?

Too many to mention, all for very different reasons, some of which have nothing to do with graffiti.

How does it feel knowing that you are inspiring the next generation of graffiti artists in SA?

I never really thought I was inspiring anyone, I guess pretty well, if you say so. I think I still have a lot to do, I’m just glad when someone looks at my pictures, even better if they can relate, it validates my existence. I only hope someone picks this shit up by the time I leave.

Where is the best place you’ve painted and where in the world you like to paint next?

I really like the freedom Johannesburg has, in first world cities it’s a lot more difficult to get walls, do street bombing and trains, as the public are very aware of graffiti. Jo’burg graffiti is still in somewhat of a grey area, in all aspects… I liked Sofia, Bulgaria, it’s similar there. Brazil is a must…

Will you ever stop doing graffiti?

What do you think graffiti of the future will look like?

Probably like graffiti of the past, it all goes in circles. Crappy retro graffiti is popular at the moment, just as vintage clothing is. I wouldn’t be surprised if people start doing cave man scratching and it becomes popular. Then again, so is the new “design” style graffiti, which is definitely a lot more “futuristic” looking, with a dash of retro. I don’t know, graffiti is so diverse at this point it could go anyway. 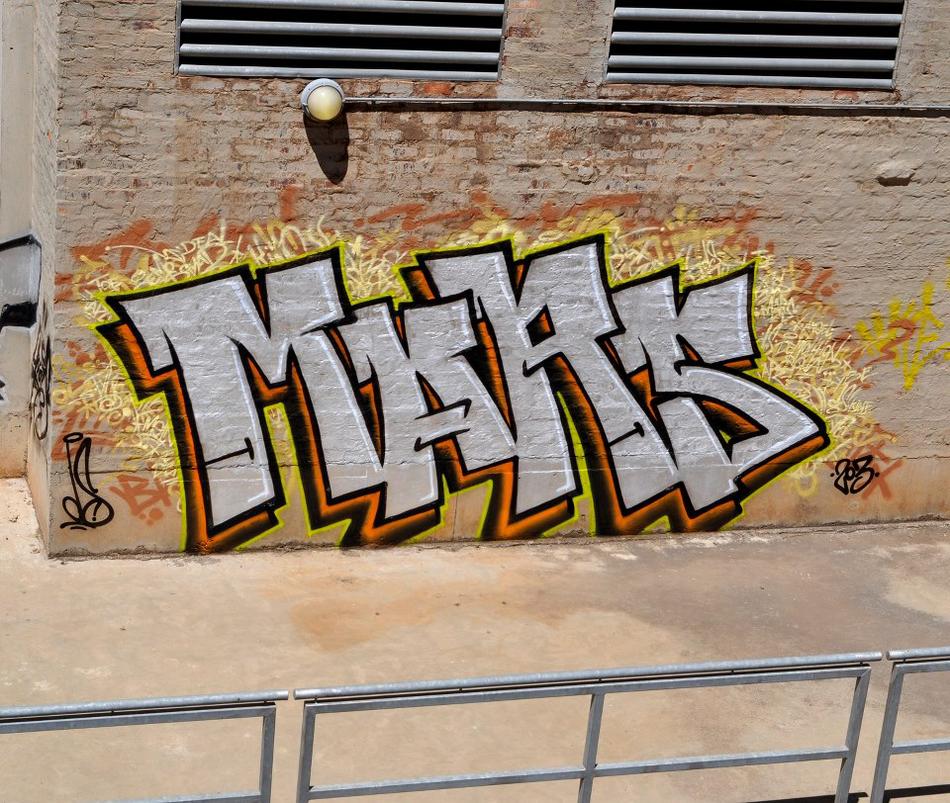 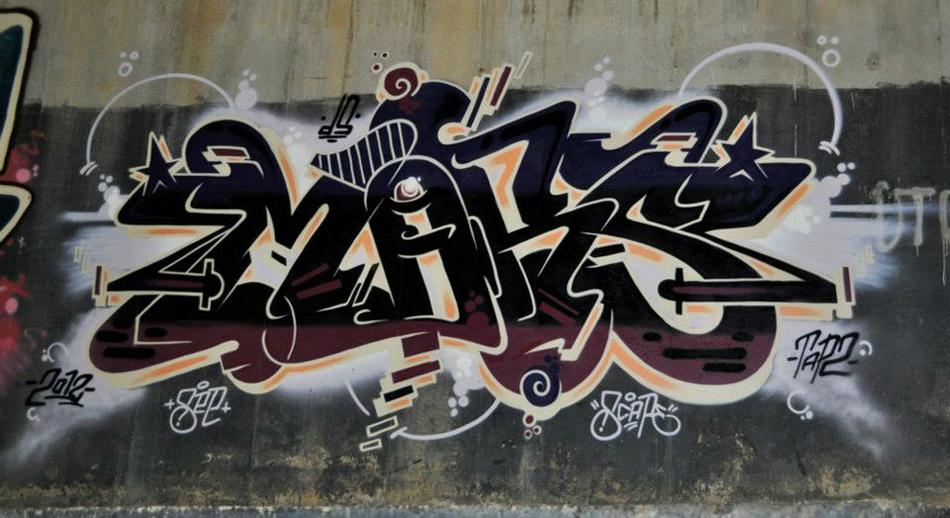 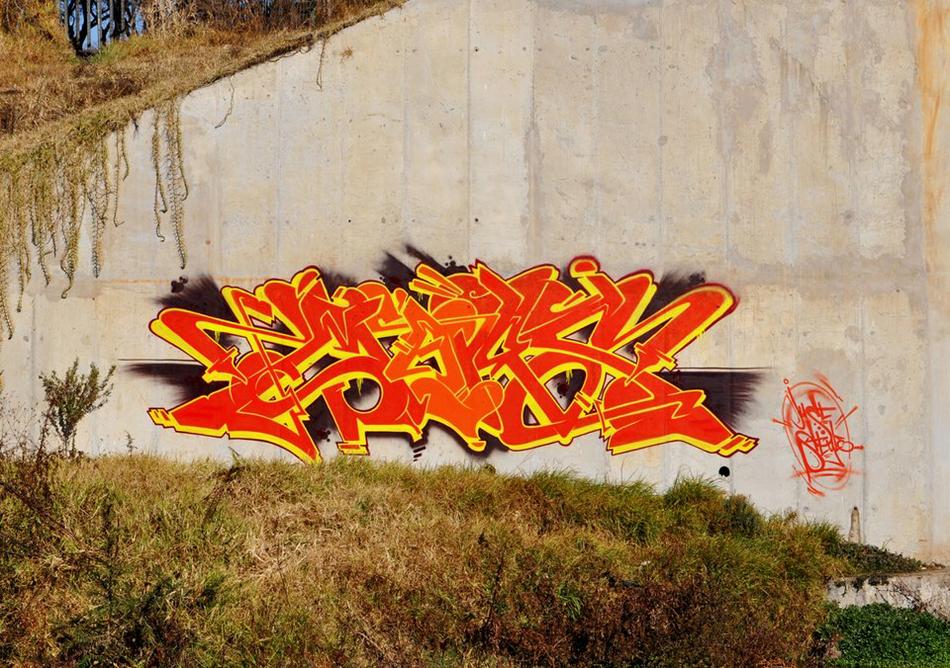 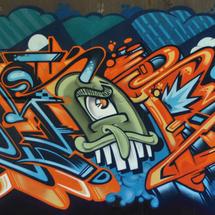