When did you first start graffiti? What got you into it and why did you start?

I started writing around 97-98. I had been sketching before then because I had seen graffiti before in rap videos and stuff. When I got more into the hip-hop culture graffiti art became a more natural element for me.

Tell us about your name and why you chose it.

I started out writing Icon but always struggled with connecting the I and the C so I changed my name to Hack. Later, I found out that there was a Hack in Cape Town, so because I had already been using the name, I just changed it to HacOne. I liked the way the letters worked together.

You are one of the first-generation writers in Johannesburg. Give us some insight on the early graffiti scene there.

When I started out there was a few writers I used to see around Yeoville and Joburg CBD - that’s where I used to hang around. Dred from MSE was everywhere, but there were also other writers - Gogga was up, Dice, Twiggy, Camy and his crew called UNKNOWN, Patch…

Gogga used to hold these graff classes at a club down town called Reality, that’s where I met other younger crews like KWS, Rasty and a lot of other writers. Back then I used to write with a crew called SIC, which later turned into TK. It was a really small scene and it’s grown so quickly in the past couple of years.

Are you in a crew? What is it and who else is part of it?

I’m part of a crew called TK (Time Keepers). We used to be called the Transit Killers back when we used to paint trains, but none of us do anymore, so we changed the name… The members are myself, Dice, Jade, Kasi, Ekse and Nok.

What are your views of the graffiti in your city today?

I think the scene has grown a lot from when I started out… There’s been a lot of new writers coming up. I see new names and more pieces every time I move around the city and, with the exposure to graff materials, young writers are growing much quicker than before. The quality of the pieces is getting better with time. I think what’s also good is people in Jozi are more exposed to graff so the general public is more open to the art form… There’s a general tolerance to the art which is helping the scene grow.

What do you think of bombing/tagging?

I’m not much of a bomber myself, but give respect to people who do it properly. Clean outline, nice solid fill, good lettering… I respect writers who can do that illegally in a short time. It’s all part of the culture. Like it or not, graffiti culture has that rebellious nature to it.

The art itself seeks not to conform to tradition. You’re using non-traditional art material, placing your work on non-traditional space, and sometimes the only way to do it and achieve your impact is not by permission. Tagging is an important part of graff because that’s how any writer starts out - you start tagging before you can start doing pieces. It’s also a good way to learn can control. The more you tag, the better your can control.

What is your mentality with regards to the graffiti world?

Honestly, I haven’t been paying much attention to what’s going in the graffiti world, but I do give a lot of respect to writers from countries like Brazil and Mexico. The few whom I have seen there are open to exploring and not doing things the traditional way. They have also found a way to localise their art.

It’s always ill to see graff that looks so original and so local, you can see that writers are taking inspiration from their surroundings as opposed to just doing what everyone in other countries are doing.

What is your day job and how does it relate to your graffiti?

I’m a graphic designer by profession. Graffiti influenced my love for typography… There is a big relationship between the two. I normally take some elements from the one discipline and use it on the other - the colours I use for my graff work are normally colours that I would use in design work. 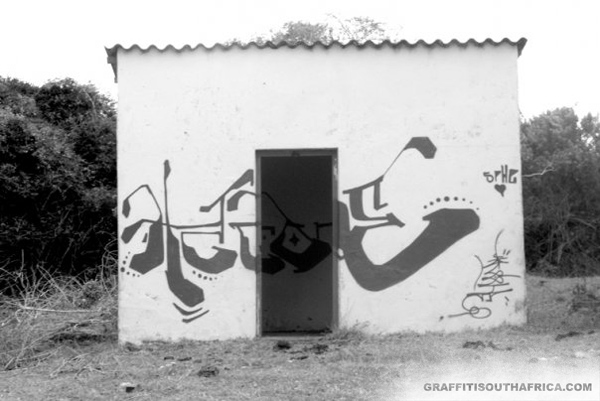 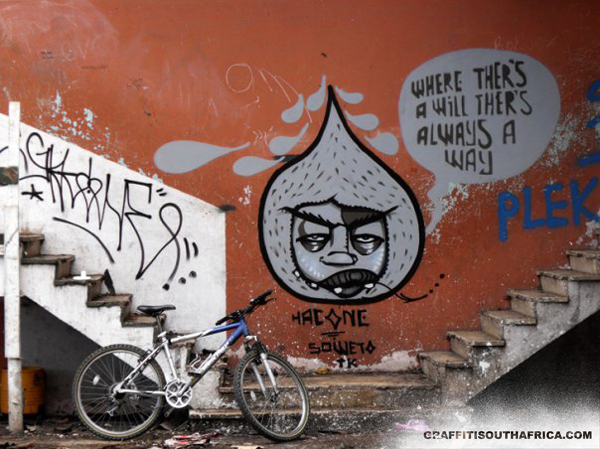 How would you describe your style? And what are your influences?

I cannot necessarily describe my style as it changes every so often, but I’m mostly influenced by nature and humankind. You can find some really nice colour combinations just by watching birds.

Your characters are very unique. Love the way their skin/bones are constructed. Almost like a muscular structure. Tell us more about this.

At some point I got into a space where I was bored with just writing my name and wanted to create something more organic that could be recognised easily, so I started drawing this character and I’ve been developing it ever since. 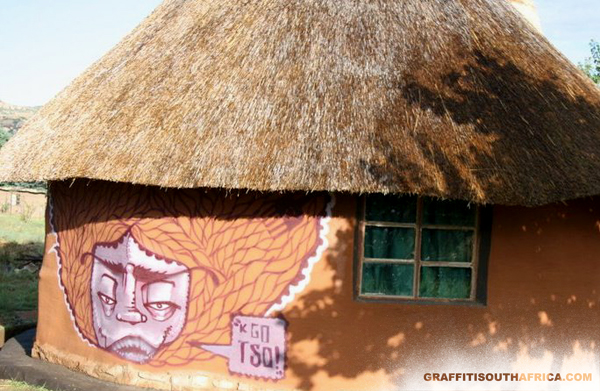 Everyone who’s doing what they love and sticking to it…

Who have you most enjoyed painting with? And which other graffiti artists in South Africa do you admire?

Generally, I just paint with whoever is down if I’m not painting with my posse. Besides my crew, I’ve always enjoyed painting with Faith47 and I’ve also enjoyed doing walls with Mak1one, Tower, Wise, Conform, Drone and Rasty, just to name a few. But I enjoy painting with different writers…

I would have dug to paint with Dare (RIP). He’s been a great influence in my work… I would also dig to paint a wall with Os Gemeos (the Brazilian brothers).

Do you have any particular meaning behind your work? What does your work reflect?

The meaning changes from time to time, depending on what’s on my mind at that particular time. I like playing around with different topics, from nature to politics to just plain fun stuff that inspires positives in the viewer.

You like to add a message to your pieces. What reaction do you hope to get when people view your work?

Well, in the past couple of years, I have come to a conclusion that graff needs to speak to a wider audience as opposed to just speaking to a selected few friends in my graff circle. It’s always nice when your work gets respect from other people not because it’s colourful but because it means something to them and they can relate to it. I try and not worry about how people react to the works though. I just put thoughts out there for people to ponder on… 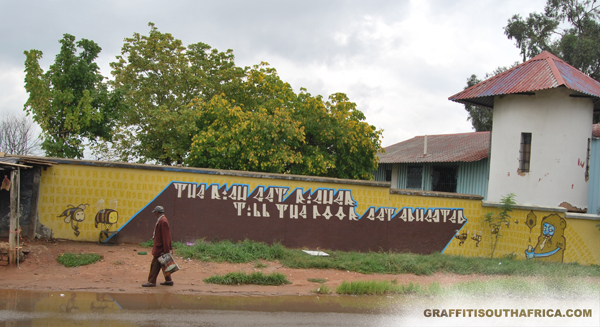 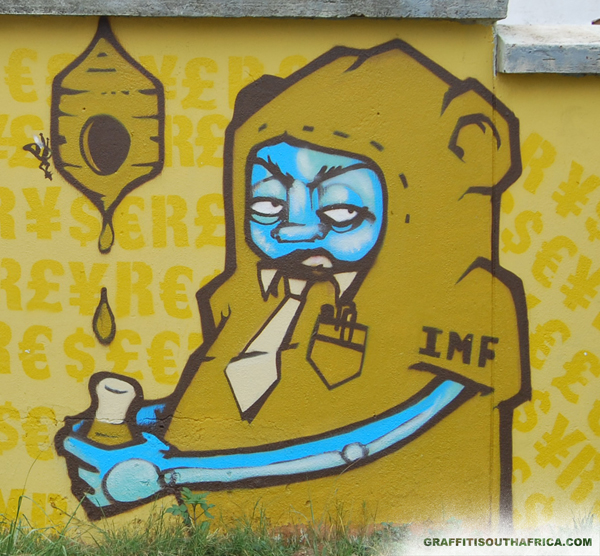 What goals do you have for the future?

I have one goal with regards to graffiti and that’s to paint and never stop doing it. I would like to have a piece in every African country at some point, so I guess that’s one long-term goal.

What do you think the graffiti scene in SA will be like in the future?

I think it’s only going to get bigger… I’d like to see it at some point taking a more definitive stance and being recognised as a South African style. I would like see more writers taking inspiration from their surroundings…

Do you think that there is a difference between graffiti and street art?

Not necessarily. It’s the same I think - a guy putting up a paste-up of a COW and someone writing COW is all the same to me. It serves the same purpose and that’s to get whatever they are doing out there on the streets.

What do you think of the phenomenon that street art is becoming overseas? It is almost like modern art. Do you follow the international street art scene?

I think it’s cool because it lets artists utilise the space around them rather than having work in galleries for a selected elite. And sometimes I find it more potent than traditional graffiti… I like how some artists think about positioning of the piece and location. 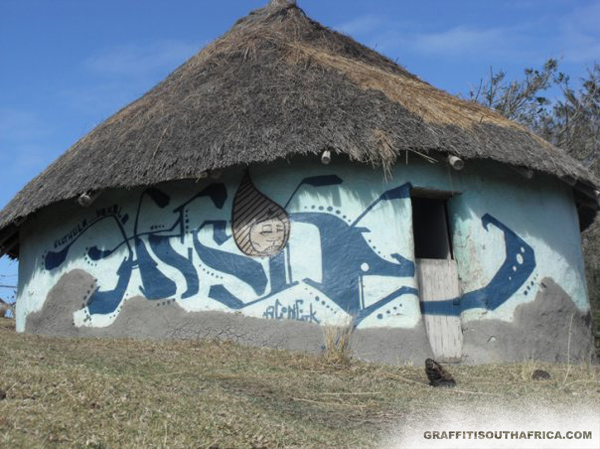 What would you have wanted to do if you weren’t doing what you’re doing now?

I don’t see myself doing anything different…

What music are you really into at the moment?

Most of the time I tune into a lot of jazz, dub and Afrobeat. Rap music in small doses, and everything else in between. I try not to limit my ears when it comes to music.

What other interests do you have?

Every now and then I like getting out of the city - I like travelling. I’m into hiking, camping and stuff… I also collect records and, on random occasions, I try to make dub music. 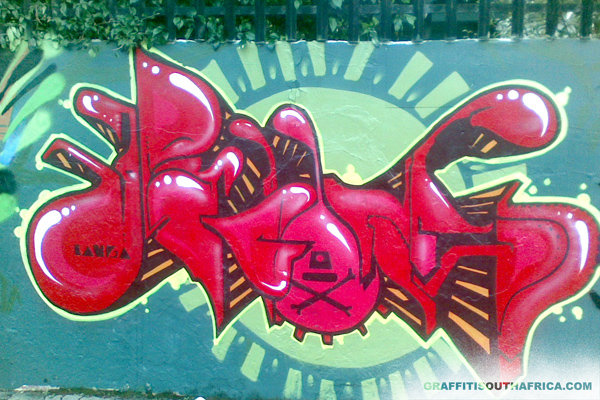 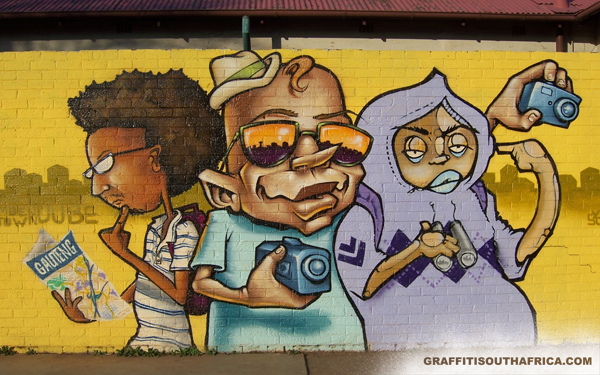 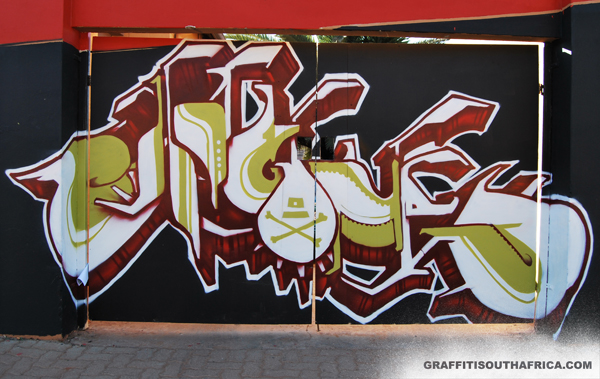 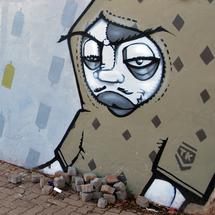