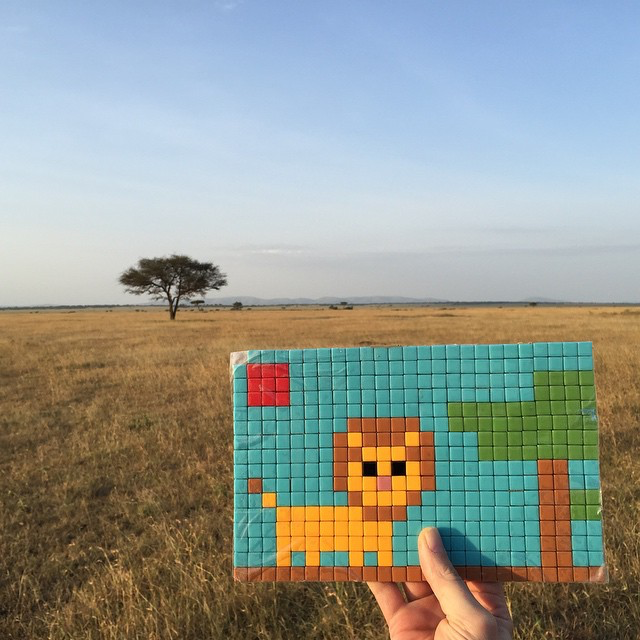 The notorious Space Invader from France has recently placed his mosaic street art works around Tanzania. This time around (see his previous African works here) he even collaborated with Vhils a.k.a Alexandre Farto (Portugal)… 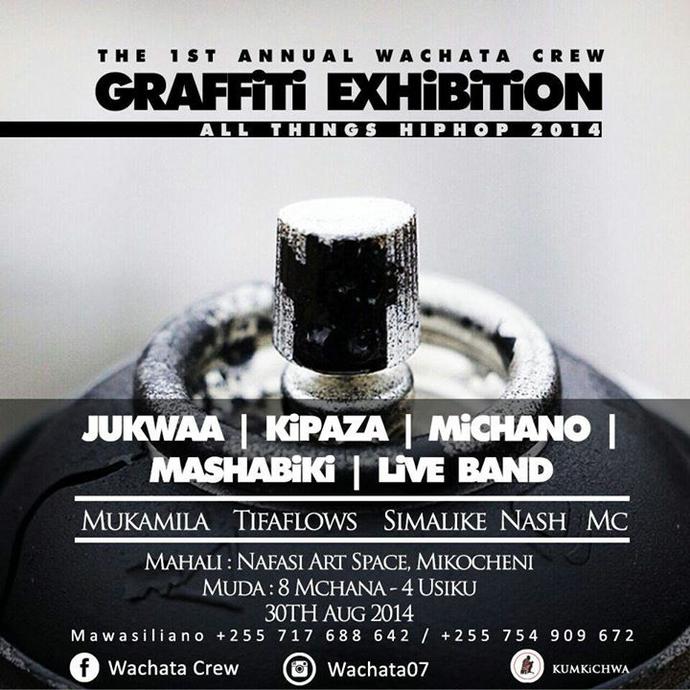 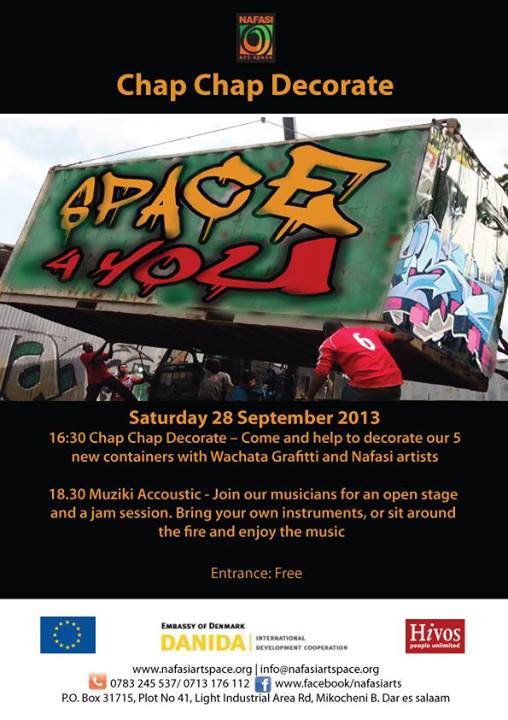 >> More about the Wachata Crew here. 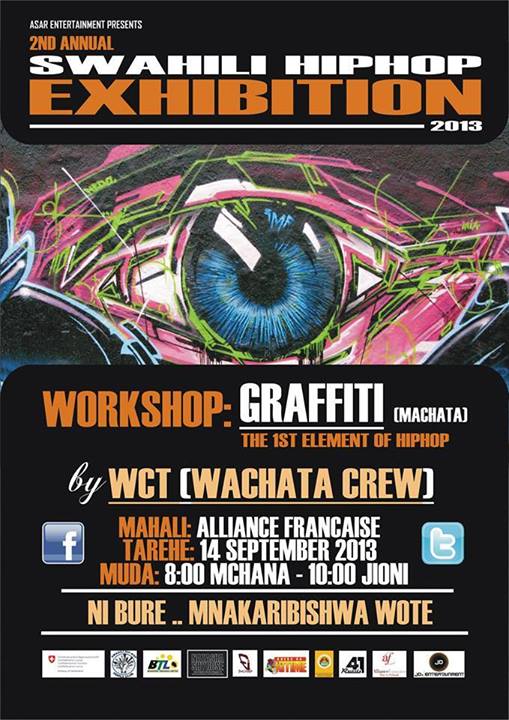 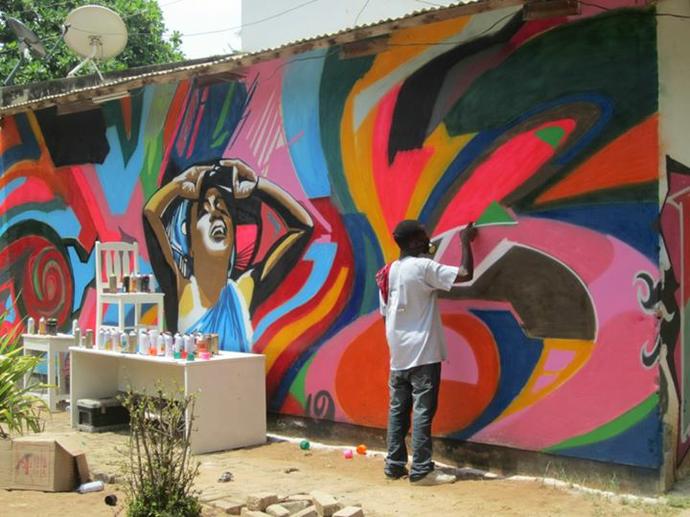 “August 2007 marked the date when WCT was formed. WCT stands for Wachata, which is taken from the English word, ‘charter’. It is also a Swahili slang term for ‘graffiti’, derived from the ‘stowaways’ who pioneered the charcoal tagging style back in the day. It’s so popular that every time you do a tag or a piece, people will refer it as ‘chata’. Also, ‘Wa’ in Kiswahili means ‘Us’ in plural terms. I thought it would be good for us, and all those who do graffiti, to call ourselves: WACHATA.” 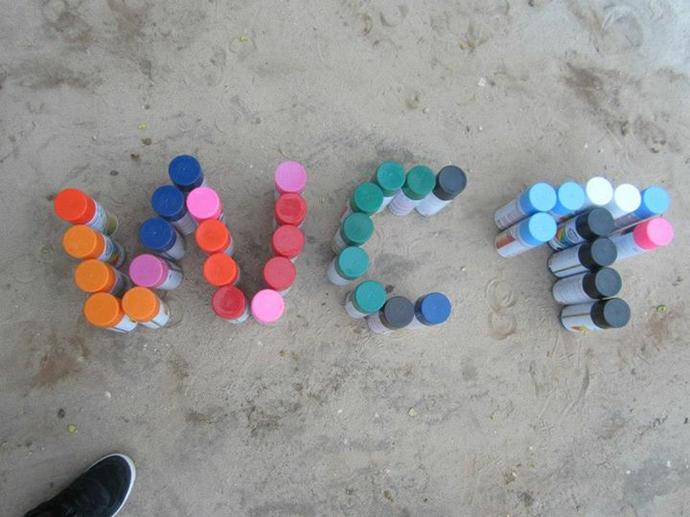 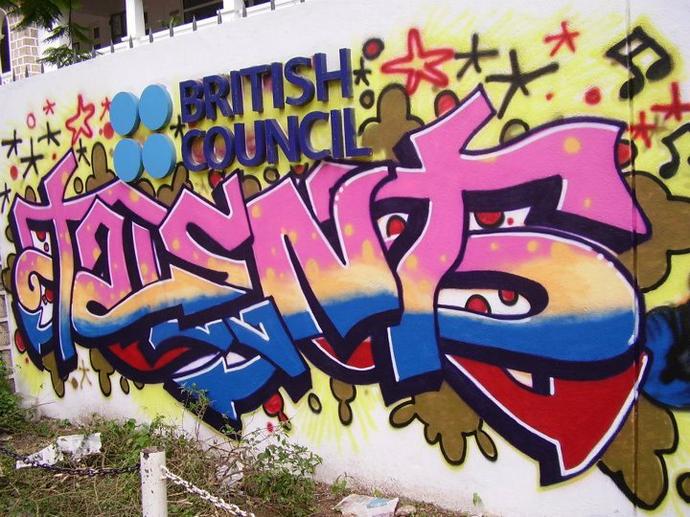 GRAFFITI is considered by many as the last hip hop element in Tanzania. However, graffiti has been around since the late 1970s during the time of Ujamaa (African Socialism) when most Tanzanians had no access to western culture or Europe, the Internet and computer technology in general. The youth along the coastal towns of Dar es Salaam, Tanga, Mtwara and Zanzibar started to become stowaways in ships that entered and exited the country. Some riskily made it to Europe and the west with dreams of becoming seamen or just escaping the hardships when the Tanzanian economy was in bad shape (right after the Tanzania-Uganda war that sent dictator Idi Amin Dada into exile). These youths started tagging their real names and nicknames on city walls using charcoal which was available in any homestead and was easy to use in ‘leaving a mark’. This new art form was given the name “chata”, a Swahili slang term for graffiti. Spray cans were not available at that time.

Though every nation has its own graffiti backgrounds, Tanzania was similar to that of New York when TAKI 183 was recognized for tagging his name all around his city. The only difference is that here in Tanzania, no one paid attention to this new art trend and it passed unnoticed by art critics, the media and government in general. Even as late as when spray cans started flowing into Tanzania, they were only used for spraying cars or bikes just for the effort of replacing the old similar colour. In July 2003, one of the very first graffiti pieces was painted in Dar es Salaam by a South African expatriate known as Zaki. This historical piece stood along the Old Bagamoyo Road in Mikocheni area and it spelt “CURE”. In 2004/2005, Sela One (Sela-1), a graffiti artist from Germany, did a lot of pieces in Dar es Salaam, Tanga and Arusha. By naming himself ‘Sela’, he was cherishing the name of the first Tanzanian messengers of graffiti. He was also honouring the past stowaways as it is a popular Swahili slang term which was given to any youth with the ambition to stowaway. He opened eyes of many, showing them a real westernised graffiti piece. 2007 brought ‘Words and Pictures’ (WaPi), a monthly open mic event that celebrated all elements of hip hop. Hosted and sponsored by the British Council around May/June, right after the World Social Forum in Nairobi, Kenya, WaPi built a platform for underground creativity through visual arts and speech. It also enhanced confidence and excitement among the youth. In the history of graffiti and hip hop in Tanzania, WaPi was the one and only place that offered free material (spray cans, masks and markers) and white walls to paint. This event helped WCT to form. 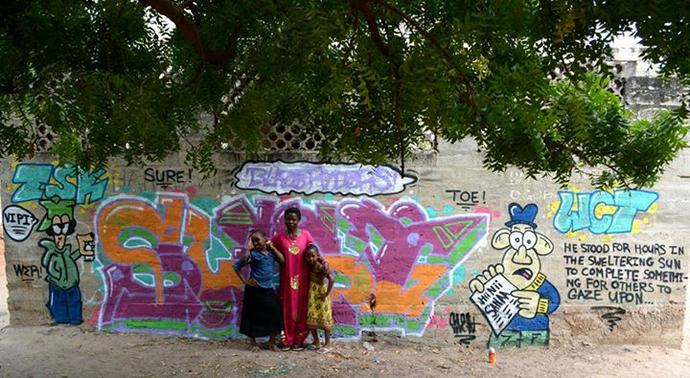 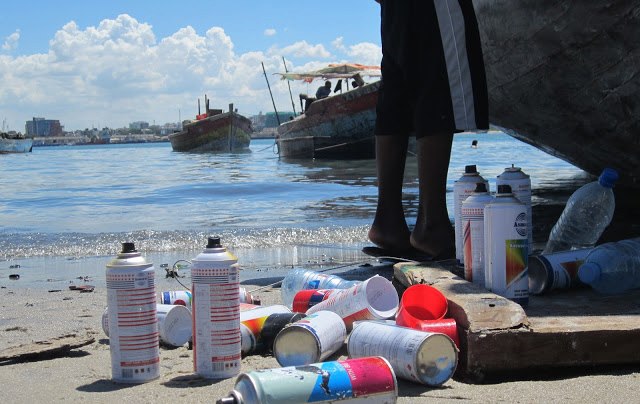 WCT stands for Wachata, a Swahili slang term for graffiti derived from the stowaways who pioneered the charcoal tagging style back in the day. Many Tanzanians also face the difficulty of pronouncing the word ‘graffiti’ - many end up saying grafit, graft, or even grafix. Having seen this problem, we decided to come up with the name ‘Wachata’ which is easy to pronounce and has a more crystal clear meaning to graffiti in the country. With graffiti being a new art form to many in Tanzania, it doesn’t fill pockets yet. So, out of 25 to 30 regular WaPi graffiti art participants, only 4 made it to form WCT’s inner circle (core), all with different art backgrounds. WCT is legally registered and operating - Mejah being a marketing personnel, Medy holding the procurement sector, Kala Singa, a distribution officer and Local being the senior designer, doing and setting up designs and sketches when it comes to commissioned work. Since WCT is a collective movement, it has other independent chapters in Mwanza city led by Edo, who is mostly engaged in tattooing, and Yuzzo, and Mizani 86 in Moshi city who makes merchandise. There is one unforgettable individual in Tanzanian graffiti who enhanced the scene - Kool Koor, a legendary graffiti artist from the Bronx, NYC during the 1970s and 1980s, who now resides in Brussels. He was a ‘springboard’ for the movement in 2007 and was invited by the East African Biennale, an art exhibition in East Africa. It took place during the same week of a WaPi event and he decided to do a graffiti workshop too. He introduced us to Montana spray cans and shared different techniques and basics of graffiti which we all had no idea of. From there everything came into place and, since then, Kool Koor has come to Dar es Salaam twice. WCT Crew is also part of Kool Koor’s worldwide graffiti movement known as “YES WE CAN”.

Thus far, WCT is the only crew that’s engaged in graffiti in Tanzania, the main tool used being a spray can. WCT and the graffiti scene in general has been lucky as we never get negative feedback. People don’t refer it to vandalism, or at least it doesn’t look like vandalism but rather a piece of art. This success has been achieved by the way WCT principles its work. We have no trouble with the law and citizens, even the government at the moment. We have done commissioned work with big media companies like the East African TV, Clouds TV, TBC1, British Council and Zantel Epic Marketing campaigns (a mobile telephone company). We have also done a lot of graffiti for most hip hop music videos in Tanzania. The use of vibrant colours is another thing which WCT Crew has been credited for, not because we’re the best, it’s because of improvisation and a creative way we use the limited variety of available colours (that are also very bad in quality - from the U.A.E). 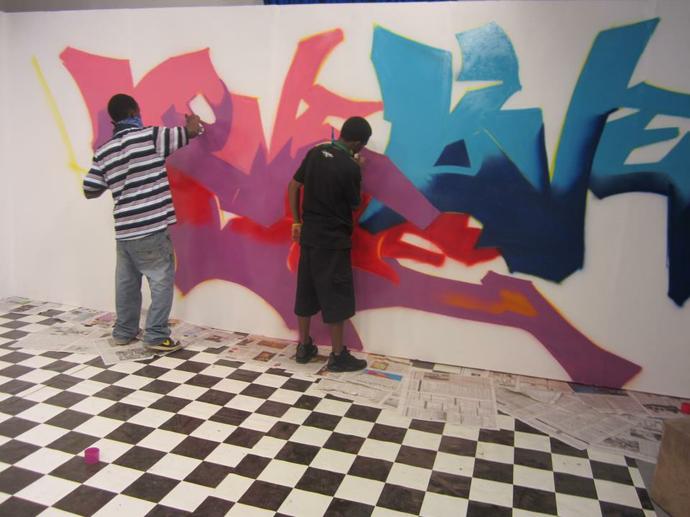 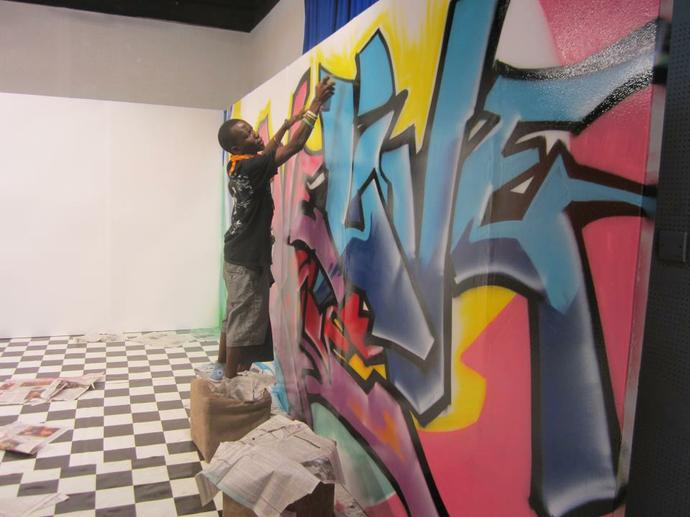 Despite the challenges of not having many choices, WCT has still managed to use what it has to produce good quality work. Apart from doing graffiti, we also design and print T-shirts to meet the huge market and hold graffiti classes on Saturdays at the Makutano Arts & Crafts Centre in Oyster Bay and at Nafasi Artspace in Mikocheni. The future of graffiti in Tanzania is bright and promising. People are tired of the same type of art when it comes to corporate advertising and advertising campaigns, because most of it is done using computers. Those who want a unique artwork see graffiti as a source, and it is a way to attract a young audience. Artists can now get paid for their creative work, although it is not as big in the neighbouring countries like Kenya. WCT has also gained more attention in Tanzania because we get much of the media attention, but at the same time, this shouldn’t overshadow the fact that we’ve laid down a solid foundation from which we can carry something positive to the people, taking it beyond just tagging or bombing our names. We are now working on an African identity with regards to graffiti style. 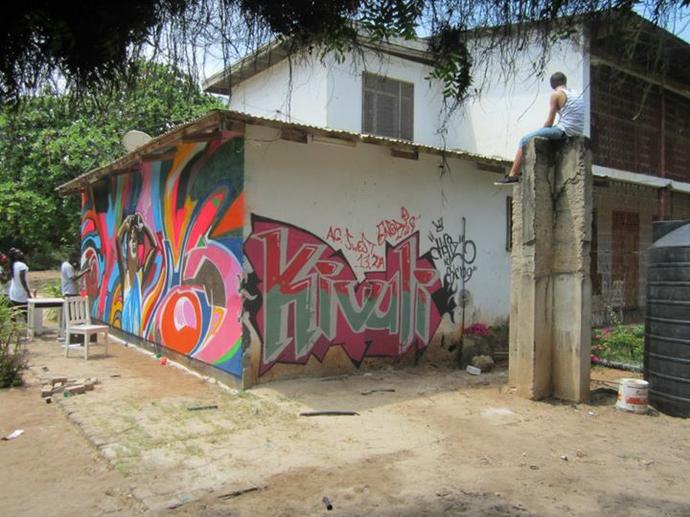 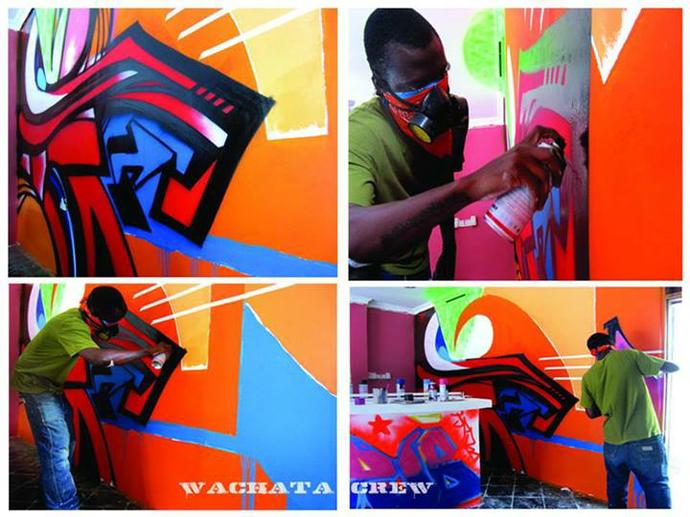 Check out an interview with WCT here.