“Since the first solo exhibition in 2008 Asha Zero’s work has caused uproar amongst local and international art collectors. Zero’s paintings are laboriously produced and time consuming to make, hence the reason why there are so few of them, snapped-up by observant collectors who buy any Zero work they can find. All previous Zero exhibitions have sold-out, and those collectors who did not manage to purchase paintings have turned to the secondary market where auction prices have consistently soared. Another solo exhibition by Zero is planned for 2012 at The Gallery in Cork Street, London, substituting for a previous exhibition (2009) that was postponed because all works were sold at the preview at 34Long gallery in Cape Town.” 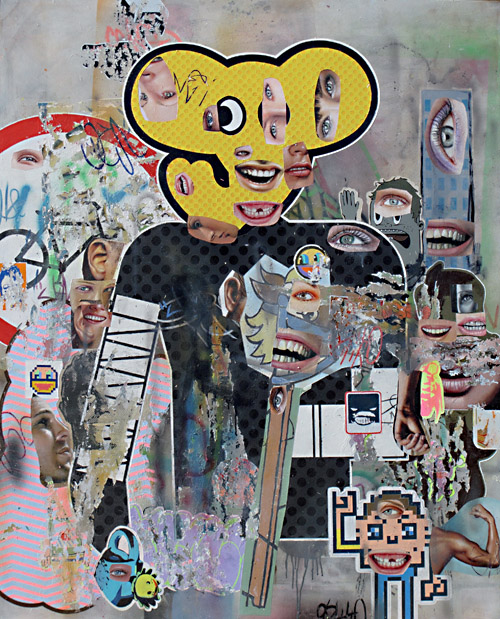 Zero’s work is as deceptive as it is honest, at first glance bearing the appearance of paper collage, but on closer inspection revealing careful and considered surface juxtapositions executed in acrylic paint. By transitioning from the prosaic to the uncanny using anything from hijacked typographical topologies to dirty grunge-inspired textures, Zero puts a new spin on things. When viewed from a distance each painting appears to be hyper-realistic visions pieced together from found media blips. When each blip is appreciated for its individual, segmented surface qualities they display abstract expressionist tendencies, marking a seminal tabula rasa in the context of Modern painting, also evinced by Zero’s contemporaries, including Gajin Fujita, Takashi Murakami and Barry McGee.

Dazed in the media haze of cosmopolitanism, Zero finds subject matter by measure of happy accidents and readymade circumstances, illustrating the neurosis of late capitalism. Zero pieces together fragmented visions of the counterfeit, transmitted truths that erase any distinction between the authentic and inauthentic; where dominant values no longer teeter on the opposition between good and evil, but tinker on the pitting of evil against ‘evil’. More so, Zero attempts to make such polarizations null and void. Ultimately, Zero is neutral, merely delivering facsimiled captions from ground zero, stumbling upon the ubiquitous and moribund relationship between the original and the representation.

Zero’s latest body of work progresses past such Manichean binaries, in a post- hyperrealist realm that is inadvertent towards humanist or capitalist polemics and politics. With this shift in perspective towards the media, comes an almost satirical, ultra-political, super-mediated understanding, which differs from previous exhibitions, say for me (2008) and macro soda text hits (2009), often including Zero’s own self-made content, such as custom designed stickers and propaganda-style graphics, and not only found material.” 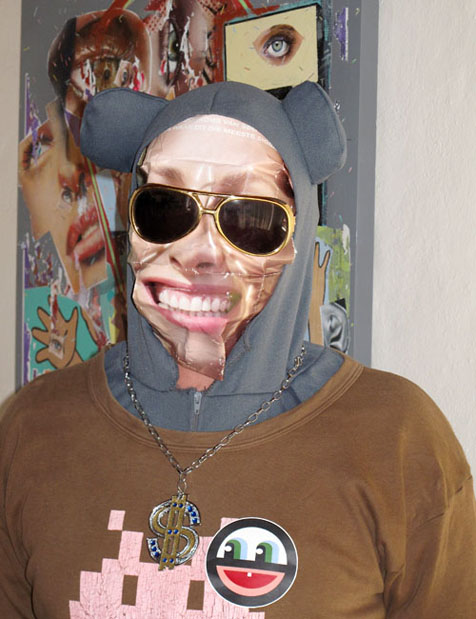 Mugshot of the artist

” micro cluster pinic is Asha Zero’s first solo exhibition at the Rooke Gallery in Newtown, Johannesburg, comprising fifteen new and painstakingly executed paintings; the first body of work to be seen since 2009. The exhibition will open on 6 October and conclude on 4 November 2011. An exclusive viewing of micro cluster pinic will be held at 34FineArt in Cape Town on 13 September and will run until 17 September.