In light of her latest solstice print release, Sanctuary, we look back on Faith47‘s murals from 2016 thus far. The latest body of work is titled ‘7.83 Hz Frequency’ –

via Faith47 (Portrait by Jared Aufrichtig)

“At any given moment about 2,000 thunderstorms roll over Earth, producing some 50 flashes of lightning every second. Each lightning burst creates electromagnetic waves that begin to circle around Earth, captured between Earth’s surface and a boundary about 60 miles up. Some of the waves – if they have just the right wavelength – combine, increasing in strength, to create a repeating atmospheric heartbeat known as Schumann resonance.“ - NASA

Schumann resonances are inaudible atmospheric heartbeats; even at their highest intensity, they only reach an extremely low radio frequency of 7.83Hz. In Faith47’s new work, this resonance serves as a metaphor for our collective actions, which create an overall reverberation that we can call human nature. The series is unfolding as Faith47 creates moments of raw intimacy on walls, abandoned buildings, copper screen prints, canvases, lithographs, and multi-screen video installations, weaving in subtle references to the dates of ancient wars and schools of hypnotism.

“Relationships rise and fall; societies blossom and crumble,” says Faith47. “The profound connectedness between us creates and destroys life. We are sensitive and caring, yet at the same time vulnerable and cruel. The foundation of the 7.83Hz project is recognising this duality as well as the profound weight of our interconnectedness.”

7.83 Hz will ultimately culminate in a solo exhibition in Los Angeles in 2017. 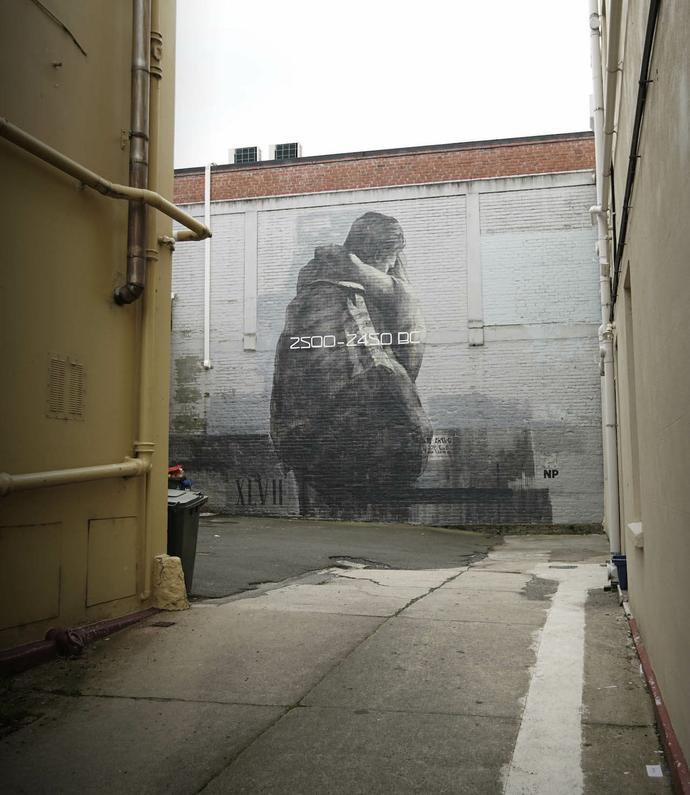 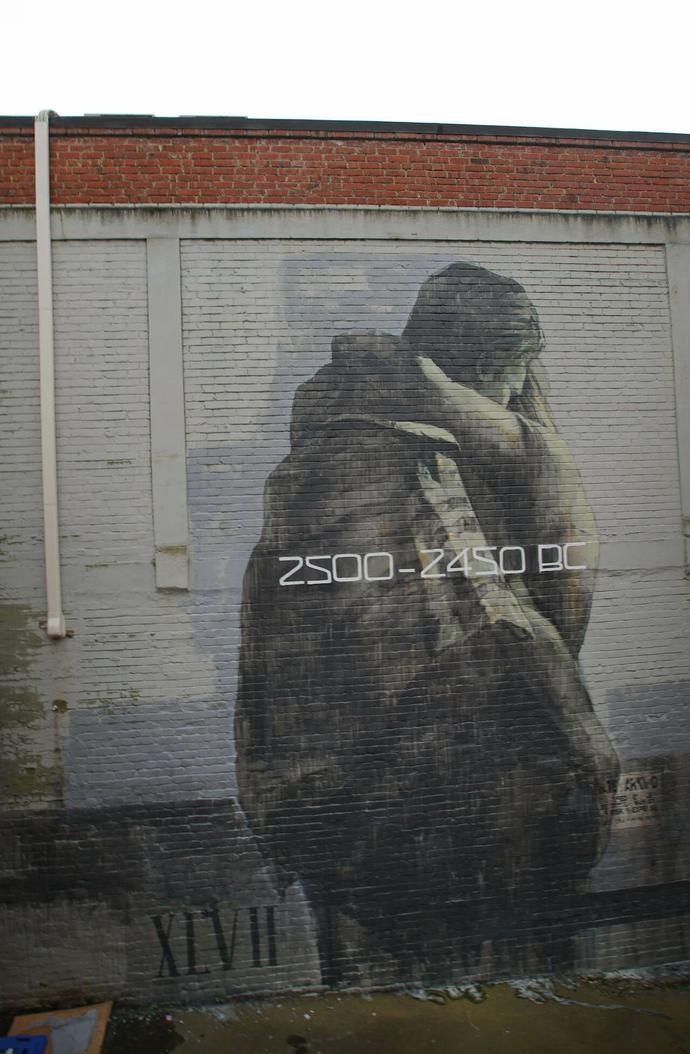 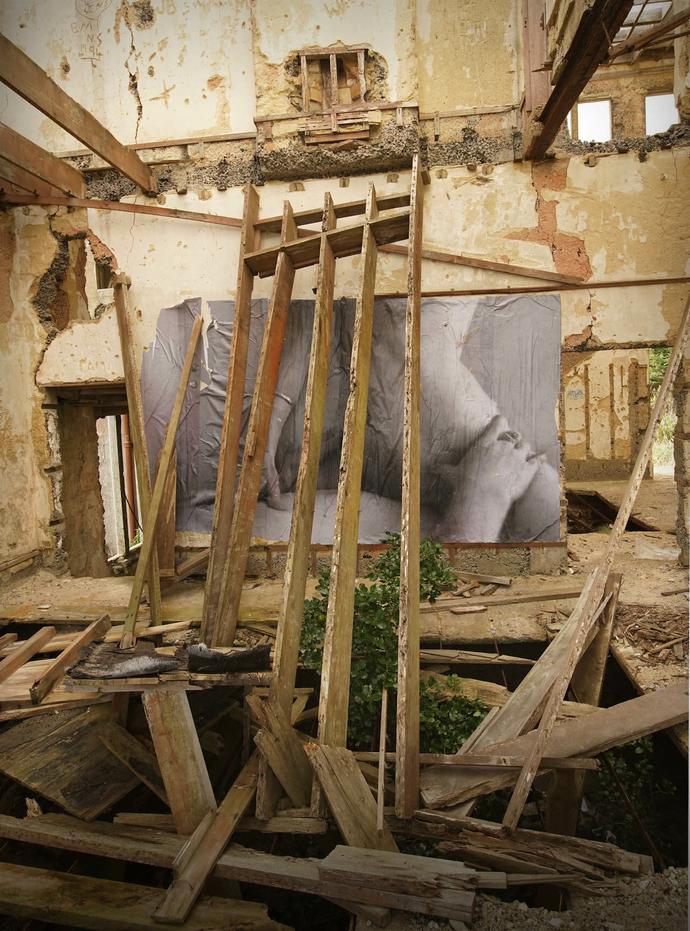 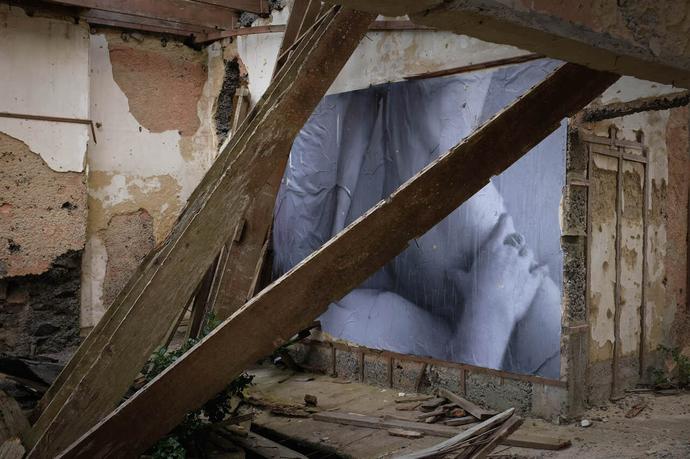 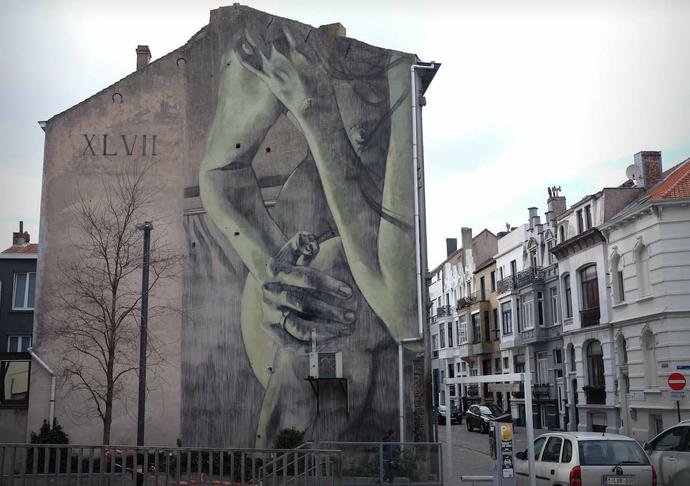 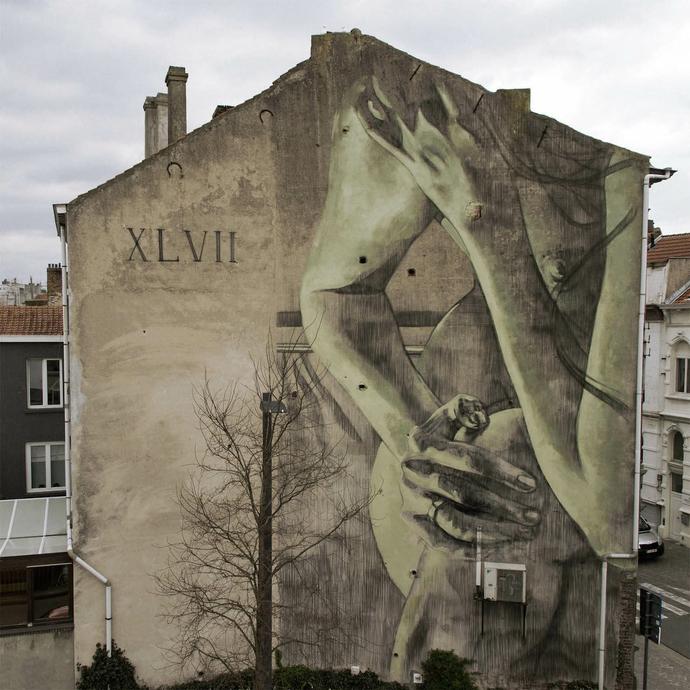 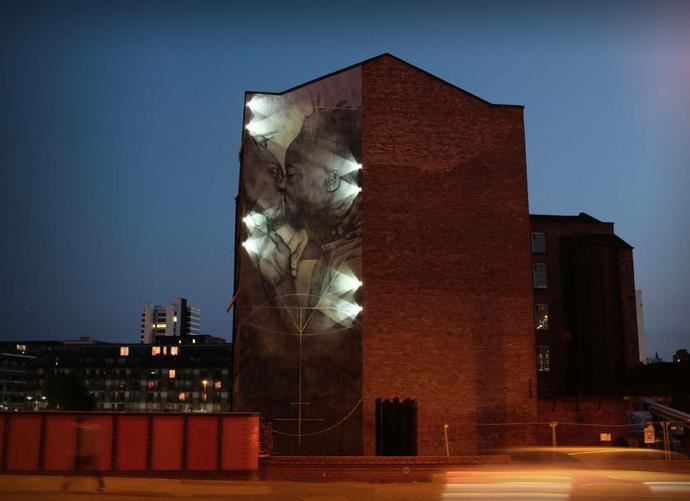 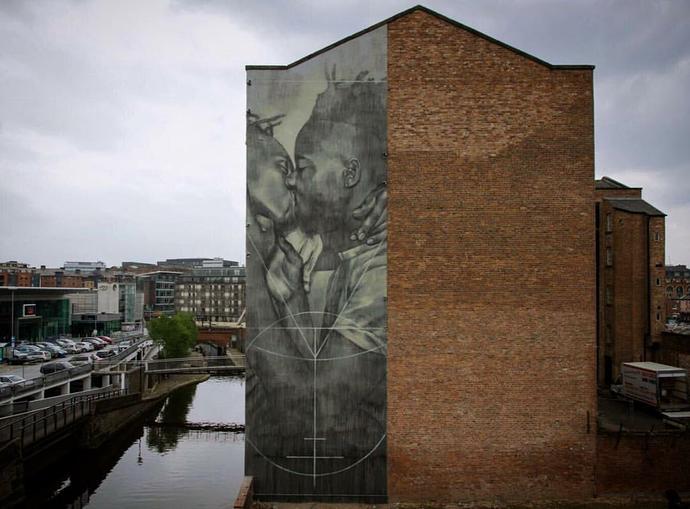 This large mural, situated in the heart of Manchester’s northern district pays homage to human intimacy as well asserting support for LGBT rights. The mural is brought to life at night with a geometric light installation exploring shadows as not merely the absence of light.

This artwork forms part of the Cities of Hope Mural Project in which the work of each artist is matched to a local grassroots organisation. Faith’s artwork serves as a potential catalyst for a dialogue between the Partisan collective in Manchester and the Triangle Project based in South Africa. 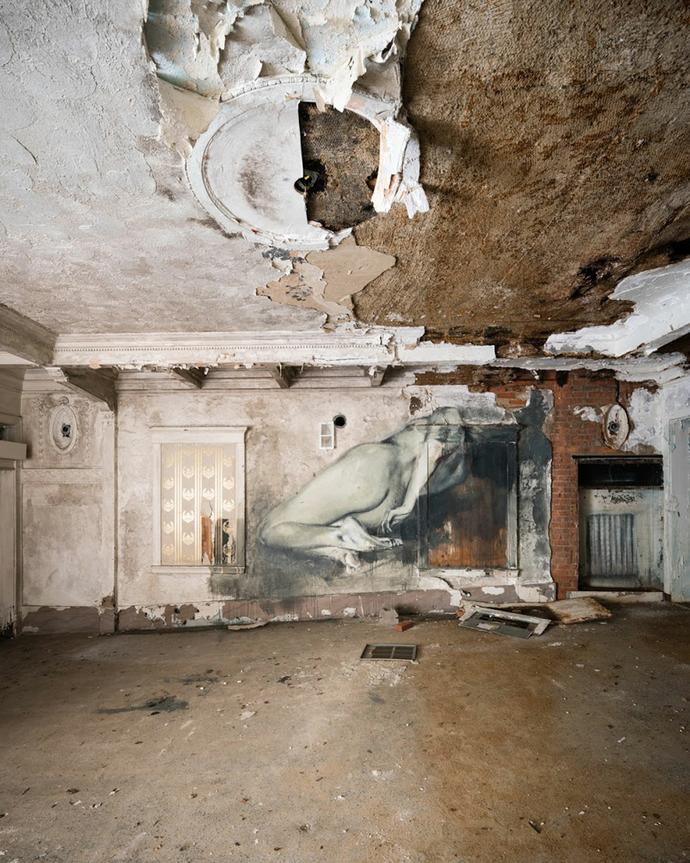 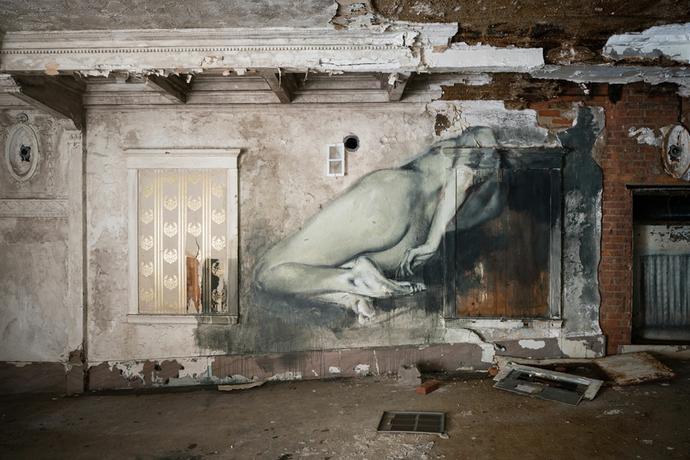 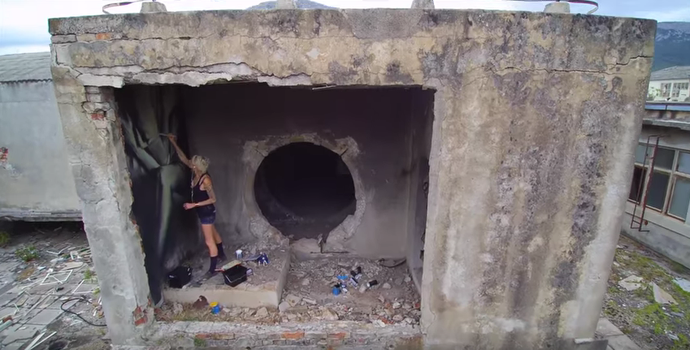 ‘Language as a Boundary’ 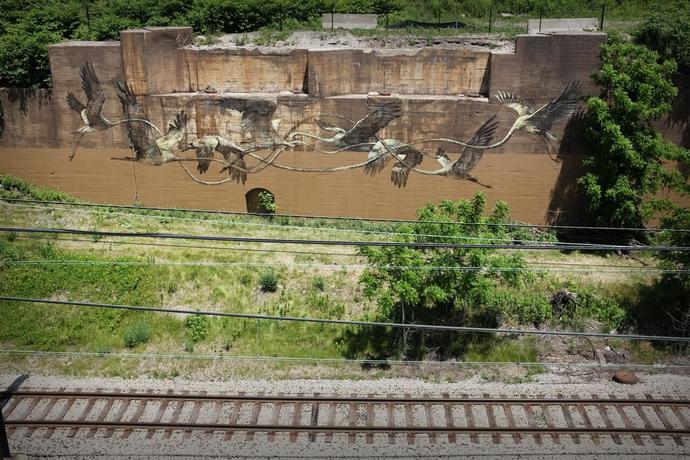 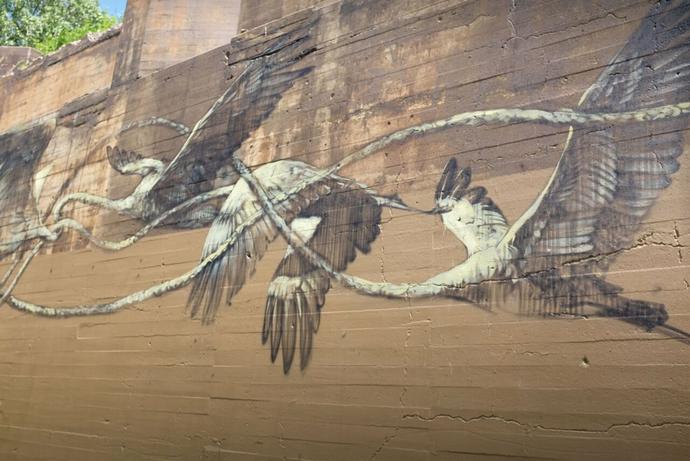 Metaphorically depicting a scene that draws symbolic inspiration from the written work ‘Language as a Boundary” by Wole Soyinka.

Looking at language as a lived phenomenon, with its dualistic function of providing necessary self affirmation on an individualistic and cultural level. Yet simultaneously acting as one of the key factors in embedding the separatist definition in social consciousness. Thus further solidifying colonial boundaries and obstructing the humanist search for a common understanding.

Painted in an effort to raise awareness for shark conservation.

Faith47 is currently exhibiting a new series of graphite ink paintings as part of the Freedom as Form exhibition, alongside BR1, Alexis Diaz and Eron, in Milan, Italy. The show runs until June 29th - http://www.wunderkammern.net/exhibitions/future-exhibition/freedomasform/