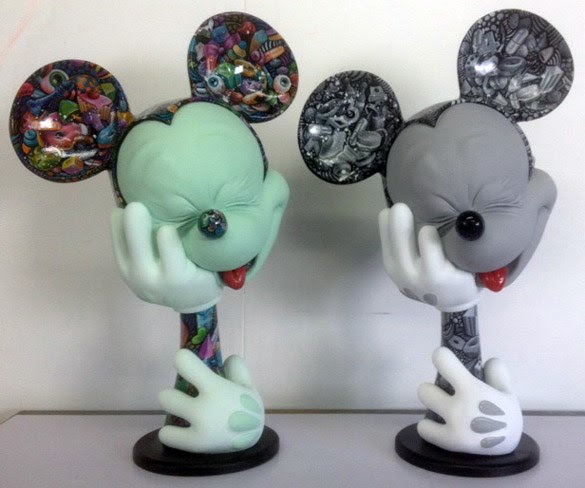 34FineArt is pleased to announce a new group exhibition featuring works by several well known local and international artists, who have in various ways appropriated this iconic image of popular culture. 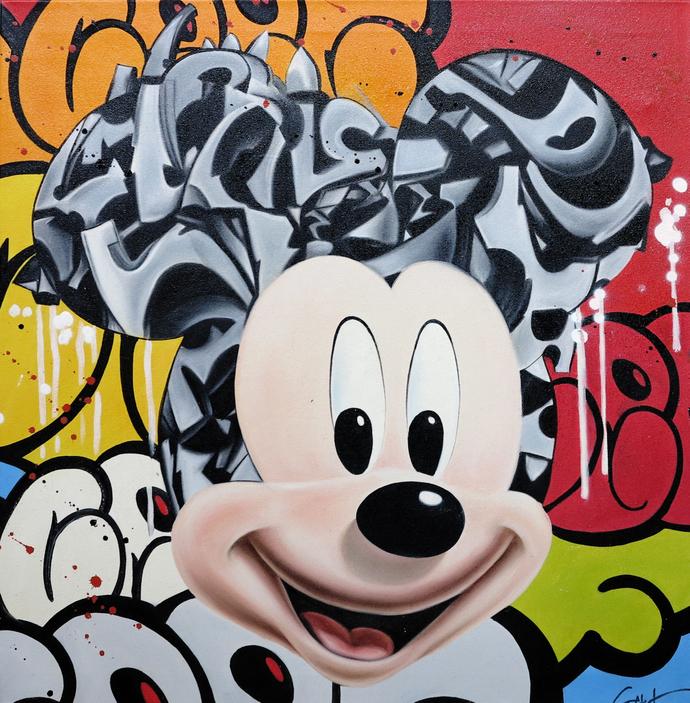 Mickey Mouse was created 87 years ago by Walt Disney and Ub Iwerks at Walt Disney Studios in California, and the much loved figure is now often associated with mass media and consumerist culture. Starting life as Mortimer Mouse, Mickey first became widely know after featuring in the film Steamboat Willie, which premiered in New York on November 18, 1928. The film was an instant success, and was also the first animation to precisely synchronise its audio and visual tracks. Ub Iwerks’ initial design was significantly influenced by the frame animation requirements of the time, with Mickey’s circular body and three fingered hands proving much quicker, and therefore cheaper, to animate by hand. Over the years the character has undergone several makeovers, and has also been joined by a cast of anthropomorphic friends, like girlfriend, Minnie Mouse, Pluto the dog, Donald Duck, Goofy, and his nemesis, Pete. Animator Fred Moore was responsible for the first changes, replacing Mickey’s round frame with a pear-like body more reminiscent of the shape we know today, as well as shortening his nose and adding pupils and white gloves.

By 1937, Disney Studios was producing about 12 Mickey short films a year, and between 1930 and 1975 Mickey was also featured extensively as a comic strip character drawn by Floyd Gottfredson. Merchandising followed, as well as the Mickey Mouse Clubhouse series, resulting in Mickey becoming one of the most identifiable cartoon icons in the world. This ubiquity also lead to the image being appropriated as a form of symbolic cultural currency. On American ballot papers, for example, the figure is sometimes used to indicate a protest vote, and further afield Mickey is often seen to symbolise the USA and the greed of its large corporations in the protection of trademarks and copyright infringement.

In the same way Mickey has been reworked and celebrated by various artists, including Keith Haring, Banksy, Takashi Murakami, and Damien Hirst, and has inspired a younger generation of Pop and Urban artists. Both Roy Lichtenstein and Andy Warhol also produced seminal works based on Mickey as icon and visual image.

“The idea of doing [a cartoon painting] without apparent alteration just occurred to me … and I did one really almost half seriously to get an idea of what it might look like. And as I was painting this painting I kind of got interested in organizing it as a painting and brought it to some kind of conclusion as an aesthetic statement, which I hadn’t really intended to do to begin with. And then I really went back to my other kind of painting, which was pretty abstract. Or tried to. But I had this cartoon painting in my studio, and it was a little too formidable. I couldn’t keep my eyes off it, and it sort of prevented me from painting in any other way, and then I decided this stuff was really serious … I would say I had it on my easel for a week. I would just want to see what it looked like. I tried to make it a work of art. I wasn’t trying just to copy. I realized that this was just so much more compelling.” – Roy Lichtenstein

Prominently featured in this exhibition and a first in South Africa, will be works by one of the youngest individuals currently making waves in the art world, fourteen year old Skyler Grey from Los Angeles. Already described as one of the brightest up-and-coming artists in the United States, Grey is your average 14 year-old, except for the impressive fact that his unique street art is on display in galleries across the globe, rather than on the family fridge. Grey’s work has been showcased in London, Switzerland and his first solo show in 2013 in LA drew huge crowds. 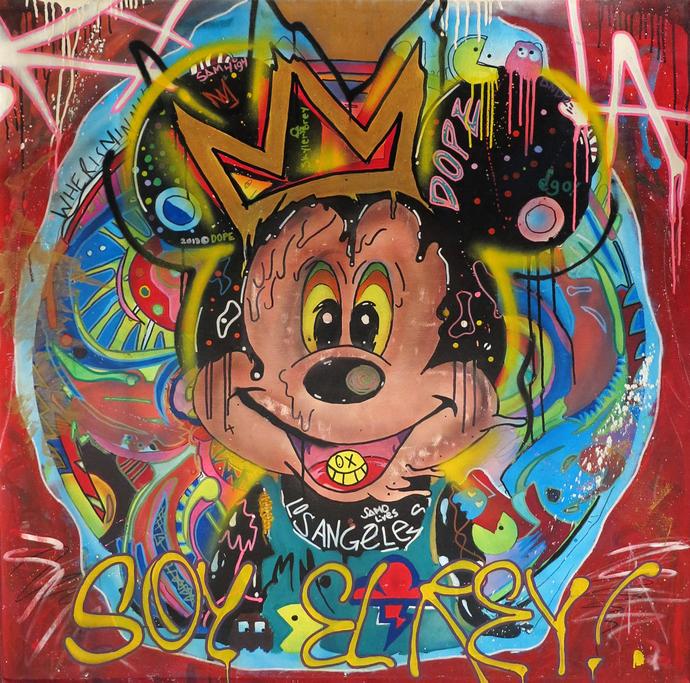