Aqua Regia or ‘royal water’ is the alchemical name for a highly corrosive mixture of nitric and hydrochloric acid that transmogrifies, dissolves and changes the most powerful substance - gold.

In Aqua Regia the artist embeds found and created objects in an enshrined space and thus, in a manner of the reliquary, pays homage to the sacramental within the ordinary. Torn up begging cards, betting sheets, discarded eviction notices suggest the fall-out of a lost struggle, while visions of supplicants insist upon the power of faith. Eclectic in its mash-up of art as fetish and art as rebooted trash object, it reprises the core question which drives the artist at odds with the cynical neo-liberal force at work today. Such affinities and discordances between hope, yearning and faith seek to restore value and re-inscribe new meaning to the rejected, discarded, the lost or the overlooked.

The restoration of value to discarded things when combined with pictorial conjuring’s of some undivided divinity, suggest a schism between the knowable and the unknowable. Whether the divine resides inside the everyday, or whether it merely intimates an absent-presence. Ultimately it seems that we are dealing with a felt experience – part belief, part yearning.

Along with these found objects are pictorial representations of incarnated divinity: animals, sacred geometry and other symbols. The question is - does the experience attest to the power of things over and above the human apprehension of them, or if the experience compels us to reconsider the object as indivisibly connected to the divine? If the viewer remains unclear it is because this exhibition arrives at a point in history in which it has become impossible to decipher a future, interpret history, let alone grasp the present.

By combining found objects and art-incarnate thoughts, Aqua Regia presents an immersive experience as much as a viewing. In this sacred space, Faith47 asks us to reconsider, and feel the hidden embattled role of the spirit in a secular realm. 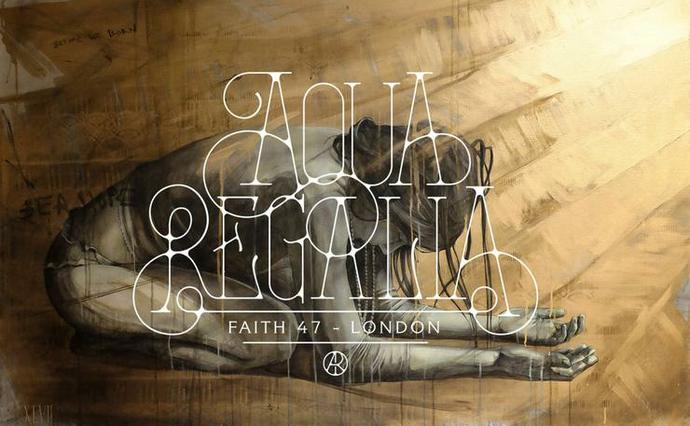 Following an active street art career spanning more than fifteen years, her work can now be found in major cities around the world. Using a wide range of media, including graphite, spray paint, oil paint, ink, photography and collage, her approach is explorative and substrate appropriate – from found and rescued objects, to time-layered and history-textured city walls and their accretions, to studio prepared canvas and wood.

Through her work, Faith47 attempts to disarm the strategies of global realpolitik, in order to advance the expression of personal truth. In this way, her work is both an internal and spiritual release that speaks to the complexities of the human condition, its deviant histories and existential search.

Faith47s first solo exhibition, Fragments of a Burnt History (2012, David Krut Gallery, Johannesburg) considered the transformation of Johannesburg into a more representative African city, exposing the harsh realities of day-to-day life and capturing the remnants of South Africa’s complex history in a personal and symbolic manner. Through the creation of an immersive environment in the gallery space, this work challenged the viewer’s detachment.

Her solo exhibitio, Aqua Regalia (2014, London) further extends the possibilities of immersive spaces, enveloping the viewer into a sacred ‘room’ filled with collected objects and other intricacies from everyday life that – together with figurative paintings – explore the notion of the mundane as sacred and celebrates the discarded and unwanted as holy.

Moniker Art Fair returns for its fifth year, having firmly established itself as London’s premiere event for contemporary art with its roots embedded in urban culture. Building on the foundations of four years experience and with the success of the 2013 event, Moniker Art Fair will be again venue-sharing with London’s leading artist-led fair – The Other Art Fair – in what will be a showcase of independent and established talent all under one roof in East London’s iconic Old Truman Brewery.

This exciting spectacle will attract 14,000-plus visitors to the capital’s East End, forming one of the major satellite events of London’s Art Week when 60,000 visitors descend on the city to form an unparalleled international art audience.

The partnership emphasises both fairs formidable reputations for showcasing artists operating under the radar of the traditional art establishment. Over a period of four days and across 21,000 Sq feet in The Old Truman Brewery’s impressive interior, this compelling combination promises to generate much interest and exposure this coming October.