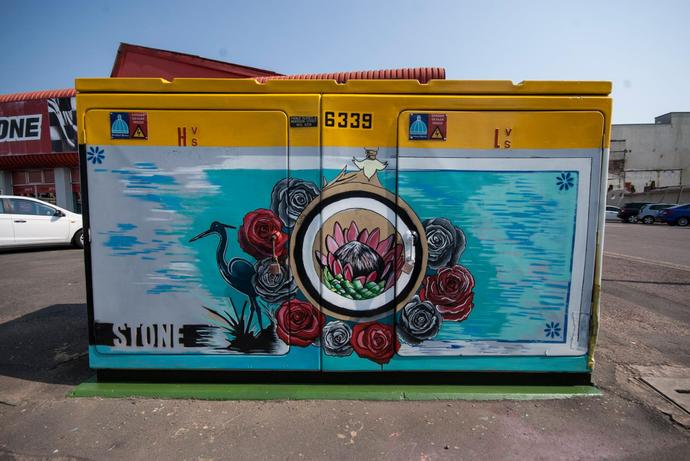 Durban has been a hive of activity recently with many mural and painting projects. From the Faith47 pillars in Warwick Triangle, to the Morrison Street murals and the Mandela Day project in the KwaMashu township.

Electricity boxes throughout the CBD were transformed as part of a fringe art intervention at the UIA 2014 conference, also in collaboration with Street Scene.

The names of the artists and the locations of the boxes are listed below:

The project is the brainchild of Jonas Barausse of Street Scene and Gabriella Peppas from Ilifindo, who are working in collaboration with the eThekweni Municipality. The second and third stage of the project aims to move from Durban CDB into suburbia and surrounding townships. Barausse and Peppas aim to take this project into the private sector after the completion of phase three. With their “Adopt a Box” project, businesses will be able to sponsor the transformation of unsightly electrical boxes near them into public works of art, giving them the opportunity to play a role in beautifying their surroundings.

Faith47 graces the streets of Durban →