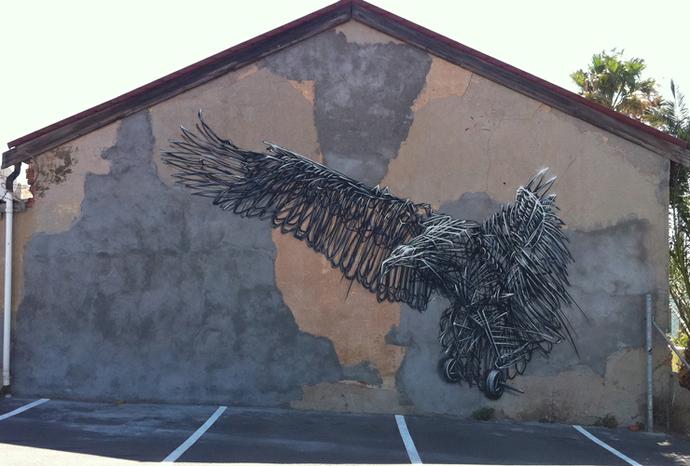 Born in China in 1984, DALeast is becoming a prominent figure among the new wave of graffiti art. He studied sculpture at the Institute of Fine Arts and began doing street art in 2004. In 2011 he relocated to Cape Town, marrying South Africa’s first lady of graffiti, Faith 47. We have been following his work since and are blown away by his unique style and the fine detail in his artworks.

Commonly depicting animals in a wire-like style, DAL’s work is complex but simple, beautiful and always intriguing. Using different mediums and spaces to create his works, he is inspired by the material world around him, life’s emotions that are part of it, as well as the spiritual world and infinite space that surrounds us.

Some of his works are currently on exhibit in New York as part of Wooster Collective‘s “Hybrid Thinking” exhibition. This group show features other street artists from around the world that have also been pushing boundaries and developing new techniques. A term has yet to come to describe these revolutionaries as street art has been referred to as post-graffiti on past occasions. Whenever the relevant term comes about, it is sure to be a new bookmark in the history of art.

Watch all videos of DALeast here

>> Itching for more? Check out: http://www.daleast.com/

Blog › SPOTLIGHT \\ The Art of DALeast